9 animals you’ll only find in the Galápagos

When Charles Darwin first arrived in the Galápagos, he wasn’t sure what he’d discover. He’d been sailing on the HMS Beagle for more than four years before arriving on these volcanic islands, and he’d seen some incredible sights along the way. Once on the islands, he found an amazing diversity of animals—a diversity that left him wondering how some animals could appear so similar at first glance, yet are so different on closer inspection.

Darwin’s subsequent writings on the subject gave birth to the concepts of natural selection and evolution as we know them now. Today, visitors to the Galápagos can still admire the same wildlife the British naturalist saw, including nine animals you won’t find anywhere else in the world but on the Galápagos Islands.

Darwin wasn’t mincing words when he described the Galápagos land iguanas as “ugly animals, of a yellowish orange beneath, and of a brownish-red color above: from their low facial angle they have a singularly stupid appearance.” Land iguanas share a symbiotic relationship with the islands’ birds, who find a food source in the parasites that live on the iguanas’ skin.

The marine iguana is perhaps one of the strangest creatures in the Galápagos. Unique among modern lizards, this creature can live on both land and in the sea, diving to depths of up to 30 feet. Perhaps unsurprisingly, Darwin didn’t like marine iguanas much more than their cousins on land, referring to them as “clumsy lizards… imps of darkness.”

This might be the tortoise who beat the hare. The giant tortoise certainly isn’t speedy, but it outlives just about every other vertebrate on Earth, with an average age well over 100 years. Giant tortoises inhabit most of the islands in the Galápagos, and the different populations display slight variations in the size and shape of their shells. This served as an important clue for Darwin as he formulated his theory of natural selection when studying the Galapagos Islands animals on his adventures.

Spot these animals on our tour to the Galapagos Islands

“Darwin’s finches” actually refers to 15 different species of small birds, each displaying a similar body type and coloring but with markedly different beaks. The different beaks evolved over thousands of years, as populations of finches adapted to their local food sources. These birds provided Darwin with his “Eureka!” moment that started his research into natural selection and evolution.

These birds have tiny bodies with enormous wingspans, and because they lack the ability to take off from water, they simply soar for days and even weeks on end. They’re clumsy on land and actually need a running downhill start to get airborne. Frigatebirds will often ride the front of weather systems, so a sudden influx of frigatebirds can be a sign that a storm is on the way. These nomadic birds will cross enormous stretches of open ocean in search of food, but they’re devoted parents—frigatebirds lay a single egg each mating season, causing the monogamous parents to care for their chicks longer than any other species of bird.

The name “booby” comes from a corruption of the Spanish bobo, which means “clown” or “fool.” Blue-footed boobies, then, get their name from two places: their bright blue feet and their remarkable clumsiness on land. Because the vast distances of the Pacific Ocean offer the Galápagos boobies a buffer zone from many predators, blue-footed boobies have spent their time developing an elaborate courtship ritual in which the male dances for the female.

These birds must have presented a challenge for Darwin. The flightless cormorant is endemic to the Galápagos, miles from any other shore—yet it lacks the ability to fly. Like everything else in the archipelago, flightless cormorants evolved in relative isolation and without natural predators. With so much food and no predators to escape from, why fly? Over time, the flightless cormorant retained most birdlike features—a beak, feathers, the same cardiovascular system—but also developed a sleek body designed for diving and wide, webbed feet to propel it through the water in search of food. This evolutionary strategy limits cormorants to just two of the Galápagos Islands, and there are fewer than 2,000 of them in total, making them one of the world’s rarest birds.

Sally Lightfoot crabs are among the most colorful inhabitants of the Galápagos. They’re also probably the most agile, skitting along at the first sight of danger and moving much more quickly than most crabs—John Steinbeck himself noted them for being nearly impossible to catch.

Have you been on a tour to the Galápagos Islands? What was your favorite animal you saw there? Share it with us on Facebook! Travel tips
7 animals in Patagonia to spot on tour 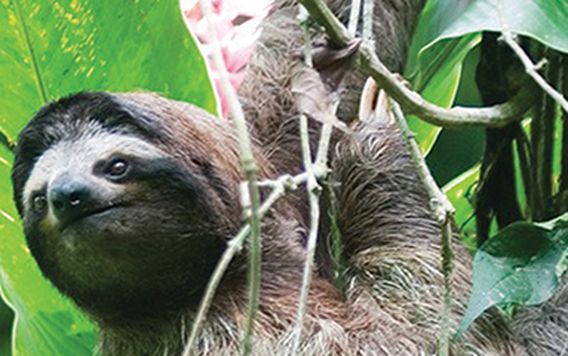 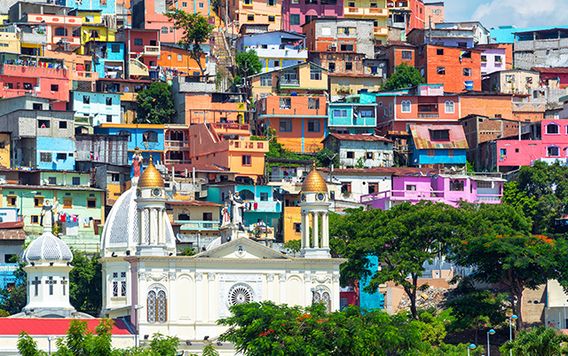