Natural charm, an appealing metropolitan vibe and a strong footing in tradition make the seaside city of Guayaquil a must-visit spot. This historic port is known as the “Pacific Pearl,” and its hard-won independence is woven into the fabric of many famous landmarks. Here are three ways to dive into the culture of this coastal hub—the largest and most populous city in Ecuador. 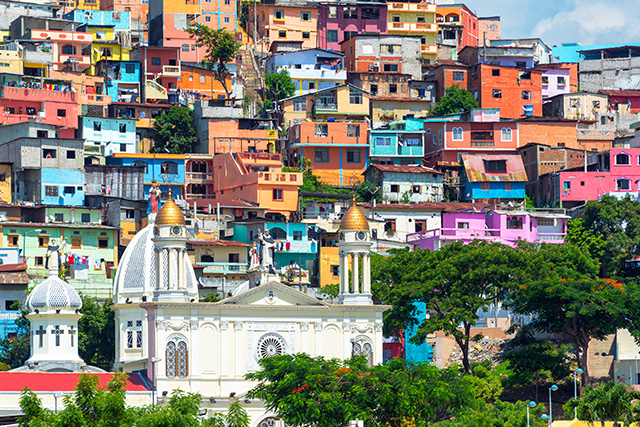 Located in the center of the city, this green space is replete with ornamental gardens, sprawling pathways and small fountains that make it the perfect place to walk or relax on a park bench. It’s dedicated to Venezuelan military and political leader, Simón Bolívar, who is credited with liberating much of South America from the colonial system of Spanish rule. After walking along the pathways, make your way across the street to the foot of the equine statue of Bolívar, which is located in front of the neo-Gothic Metropolitan Cathedral.

Keep an eye out: Bolívar Park is sometimes referred to as “Iguana Park” due to its impressive Green Iguana population. It’s not uncommon for you to see animals in the Galapagos like large reptiles, which can grow to over six feet long, lazing in the grass or lounging on a tree branch.

Take in the sights along the Malecón 2000

Malecón 2000 is an urban renewal effort that serves as a waterfront avenue. This gated, well-policed area runs along the western bank of the Río Guayas and is the perfect spot for a leisurely promenade. The tree-lined esplanade features tranquil botanical gardens, shopping centers, restaurants and statuary, making the area one of the city’s most popular public places. Mingle with locals as you stroll, and be sure to visit the area’s notable sites, including Integration Square and the fully transparent Crystal Palace.

History set in stone: The pier is also home to La Rotonda, which is a monument that depicts liberators José de San Martín and Simón Bolívar shaking hands, backed by a set of soaring, flag-topped marble columns. This site commemorates the famous meeting between the two generals in July of 1822.

This colorful, 400-year-old area is located at the foot of Santa Ana Hill, marking the point where the city of Guayaquil was founded. It’s distinguished as one of the city’s oldest neighborhoods and boasts an array of colorful, wooden homes built in a unique architectural style that pays homage to Guayaquil’s colonial past. Make your way along the area’s 16th-century cobbled streets, where you’ll discover charming balconies, historic squares, bohemian artist nooks and Santo Domingo, the city’s oldest church.

Preserving a cultural treasure: Las Peñas had to be completely rebuilt after a fire known as El Incendio Grande destroyed the whole area in 1896. The effort to reconstruct the historic neighborhood in the 20th century hints at its importance and impact on Guayaquil’s heritage.

Have you ever taken a trip to Ecuador? What was your favorite way to dive into the country’s history? Tell us on Facebook!