A meaningful journey to Normandy, France

If you could travel anywhere in the world, where would you go? For Mike, the choice was clear. France was calling to him and his wife Karen. Both experienced travelers, they’re drawn to any opportunity to explore big cities, wander through small towns, and enjoy the beauty of the countryside. But the real purpose of this trip was a personal one: to set foot on the beaches of Normandy, where Karen’s father fought during World War II.

Mike and Karen on the D-Day Beaches of Normandy

Seeing the best of France

Their journey began in Lyon, then continued up and across the country on the Grand Tour of France. Mike and Karen had been to Paris previously, so this itinerary introduced them to many small towns and rolling hills that provided contrast to the bustling City of Light. Quaint Nice, glamorous Monaco and the unbelievable Mont-Saint-Michel were all stunning. “There’s nothing better than driving into the countryside, sitting back, and looking at the beautiful scenery,” said Mike. “I didn’t realize how diverse the country was, from the south to the middle to the north.”

Paying their respects in Normandy

The most memorable and moving part of their trip came once they traveled north to Normandy. As a history lover and part-time student tour guide himself, Mike was fascinated by this region. The area also holds a personal connection for their family, which they wanted to further explore. Karen’s father served in Europe for four years during World War II, and landed on the beaches here three days after D-Day in June 1944. 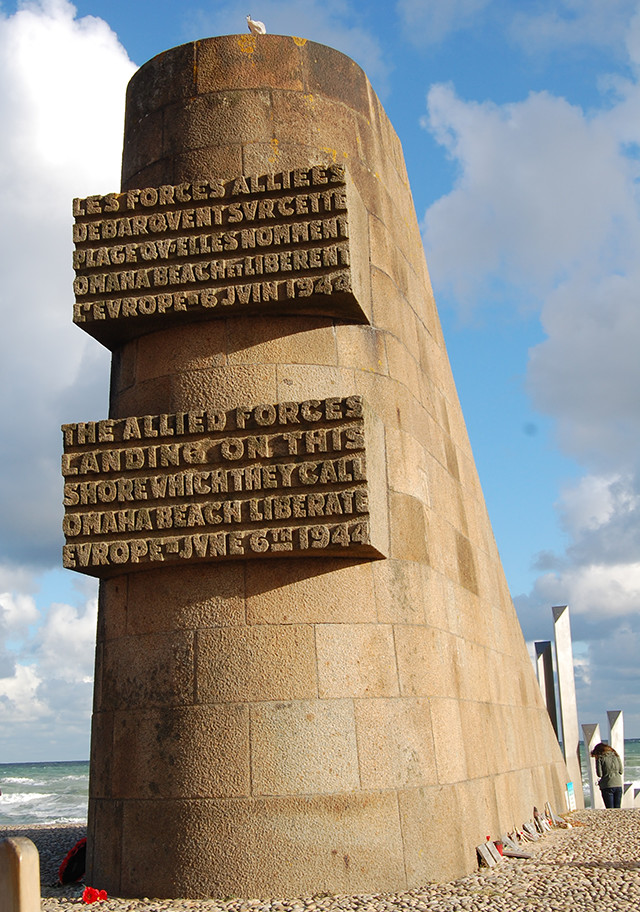 A memorial at Omaha Beach

“We remember stories from her dad about the day that they landed, and wanted to see the places he had been,” explained Mike. As they walked along the beach where the battle took place, they could see remains of bunkers and craters left from bombs. They found the exact location of where her father’s tank drove through a small opening in the dunes. It was nearly impossible for them believe what Karen’s father—and so many other brave soldiers—went through there as they took in their surroundings.

They passed the fascinating memorials built into the sand, and had time to reflect on the past. “We thought about what those guys went through and what they saw for four years,” noted Mike. “Think about what the population had to endure for those years.” As the tide went out, they remembered how courageous Karen’s father was and how he was able to survive. “As I’ve gotten older and had time to contemplate things, I think about how my life could have been so much different if he hadn’t survived. But somehow he survived,” Mike reflected.

The Normandy American Cemetery in Colleville

From Omaha Beach, they continued on to the American Cemetery, where 9,000 white crosses face the United States. “It was the most beautiful, pristine military cemetery I have ever seen in my life,” recalled Mike. They brought a small thank you card with Karen’s father’s information on it to honor those who fought. Instead of leaving the memento out in the cemetery, they took it to the visitor’s center. Mike and Karen were shocked when the workers took the card, thanked her for her father’s service, and asked if they could make it part of the center’s permanent exhibit. Their memento now sits along with other wartime artifacts that tell the story of the Normandy invasion. “Just leave yourself open when you travel,” Mike advised. “Things happen and you’ll understand why later when you have time to contemplate them.”

Photos taken during World War II—Karen’s father on the top left, and his division with General Patton

After the experience of visiting Normandy’s shores together, Mike and Karen shared their personal connection to the destination with their fellow travelers. As the group continued on to Paris, they followed in her father’s footsteps—this was the same route he took during World War II. They decided to extend their trip and continue exploring Paris on their own. They walked to the Arc de Triomphe, where her father had marched many years ago. As they looked at the massive structure, they noticed a man taking pictures and holding on to an old photograph. Striking up a conversation, Mike found out that his grandfather had been the personal secretary to General Patton, who led the 3rd Armored Spearhead Division Karen’s father was in. “That’s the beauty of all these trips—the people you meet,” he said. Traveling is all about the connections you make along the way.

Thanks to Mike and Karen for sharing their experience on tour in Normandy. Do you have a travel story to tell? We’d love to hear it—send us an email at social@goaheadtours.com.