Looking for the historical charm and intimacy of a French village on the Channel Coast? Look no further than the picturesque hamlet of Honfleur in Normandy. 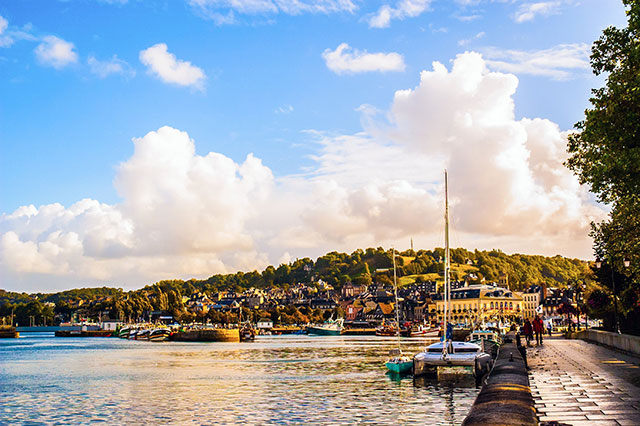 Honfleur is one of France’s most visited sites—and with good reason. Renowned for its tall buildings and ancient port, it marks the spot where the Seine River meets the sea. A town of some 9,000 inhabitants, Honfleur is situated astride the river opposite the modern commercial shipping center of Le Havre. This fortunate location has made it an important seaside village since the Middle Ages.

In more modern times, Honfleur has made a name for itself as one of the homes of early French Impressionist artists. Many of the big names of the genre (Gustave Courbet, Claude Monet and Eugène Boudin) painted here. In fact, it was here that Boudin shared his skill of painting outside under open skies with the young, talented Monet. Eventually, these artists founded the École de Honfleur (Honfleur School) here, bringing Impressionism full-scale and making this little town a painter’s inspiration for generations to come.

Besides admiring Honfleur for its beautiful landscapes, here are three must-see attractions to enjoy if you make a stop in this charming town.

Artist Eugène Boudin, nicknamed “King of the Skies,” was actually born in Honfleur, so it’s no surprise that his hometown also boasts a large collection of his art in a museum of his own name. With more than 100 works of art from his oeuvre, the Eugène Boudin Museum nicely balances this collection with works of his protégé Claude Monet, as well as Johan Jongkind, Gustave Courbet and Jean-François Millet.

Want to get a glimpse of Honfleur from right here in the U.S.? Some of Monet’s paintings of Honfleur and other landscapes in Normandy are on display at the Museum of Fine Arts in Boston.

France’s largest wooden church, St. Catherine’s was built in 1466 and contains some of the nation’s oldest surviving artifacts, artworks and craftsmanship. It was constructed by locals with experience in naval shipbuilding—travelers often remark that when viewed from the inside, the church resembles a ship’s hull. The second nave was built in the 16th century in a more conventional Gothic style.

The church was dedicated to Saint Catherine of Alexandria, whose sculpture adorns the porch of the clock-faced bell tower separating the church’s naves. The tower was originally built apart from the main church to keep it from burning if the tower were struck by lightning. An image of the tower was later captured on canvas by Boudin.

Meaning “The Old Dock,” Le Vieux Bassin was built in 1681 by French naval officer Abraham Duquesne as a loading dock for ships trading with Canada, the West Indies, Africa and the Azores, making Honfleur a major port in France. The large stone buildings on Quai Saint-Étienne, narrow wooden houses on Quai Sainte-Catherine and 18th-century Jacobean-style Lieutenancy at the old harbor’s port of entry captured the imagination of countless French painters.

Now lined with waterside restaurants and cafés, Le Vieux Bassin is a favorite for seafood, coffee and other fine foods. Take a stroll along the boardwalk at night to get a glimpse of the carousel’s lights reflecting off the Seine’s dark waters.

Have you ever taken a trip to Honfleur? Tell us about it on Facebook!