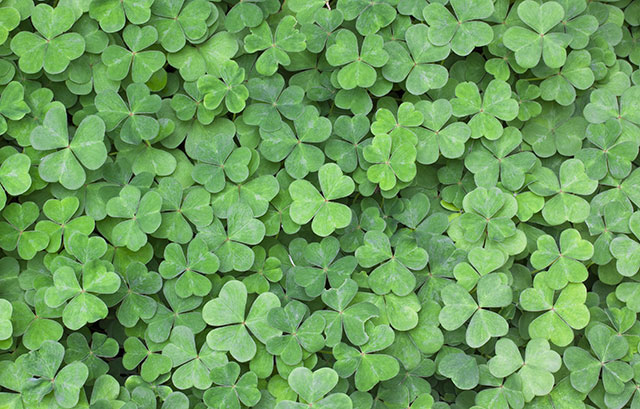 St. Patrick’s Day this month brings to mind the legendary luck of the Irish—though the phrase may actually have roots more American than Irish. This insight got us thinking: Why are certain charms and customs considered lucky in different cultures?

Often associated with Ireland and St. Patrick’s Day, four-leaf clovers are one of the most widely recognized symbols of good luck. The tradition dates back hundreds of years: before the Middle Ages, Celtic priests carried shamrocks (or three-leaf clovers) with the belief that the clovers would warn them if evil spirits were coming their way. Over the centuries, the mystical powers transferred to the very rare four-leaf clover. The first literary reference suggesting the tradition was made by Sir John Melton in 1620. According to tradition, the individual leaves of a clover each have a meaning: the first is faith, the second is hope, the third is love and the fourth (you guessed it) is luck.

Lucky bamboo (bracaena braunii) is a short houseplant in either soil or water that’s associated with the Chinese art of feng shui. Feng shui is a philosophy regarding the harmony of human existence with our surroundings, which are comprised of metal, earth, fire, water and wood. A resilient plant, lucky bamboo is considered a prime example of wood and water thriving together. The number of stalks in each plant represents different kinds of good fortune: three for happiness, five for wealth and six for health.

The Nazar amulet is often mistakenly called the Evil Eye, but it is actually believed to protect against the Evil Eye. Fear of the Evil Eye, a hostile look believed to cause injury or misfortune, dates back to the Roman Empire and seemingly spread east with Alexander the Great. The belief is also deeply rooted in Muslim culture and can be found in Islamic doctrine. Made of handblown glass, the Nazar amulets are most often found in Turkey and Greece. The vibrant blue of the Turkish Nazar is the most iconic and also has its own story—centuries ago, light-eyed people were rare in Mediterranean countries and considered threatening.

The tradition of lucky pennies can be found in many European and North American cultures, ranging from holiday traditions to wedding rituals to fountain wishes. There are several theories why—the farthest-reaching of which extends to ancient times when people believed metal was a gift from the gods. This belief is most likely the root of other metal-centric lucky traditions, like hanging horseshoes and wearing charm bracelets.

Have you picked up any lucky trinkets or rituals while traveling? Share your story with us on Facebook!

Explore these destinations to experience some lucky traditions