The northern Australian city of Darwin is a little more than 2,000 miles from Singapore on the tip of the Asian mainland. Those 2,000 miles contain thousands of islands that act as stepping stones toward the Timor, Banda and Arafura Seas—but it’s still an awfully long way for plants, animals and people to migrate. As a result, Australia’s ecosystem developed in blissful isolation for eons, which led to some striking wildlife you won’t find anywhere else. Like many islands, Australia has battled against invasive species, but these six creatures remain Australian icons. 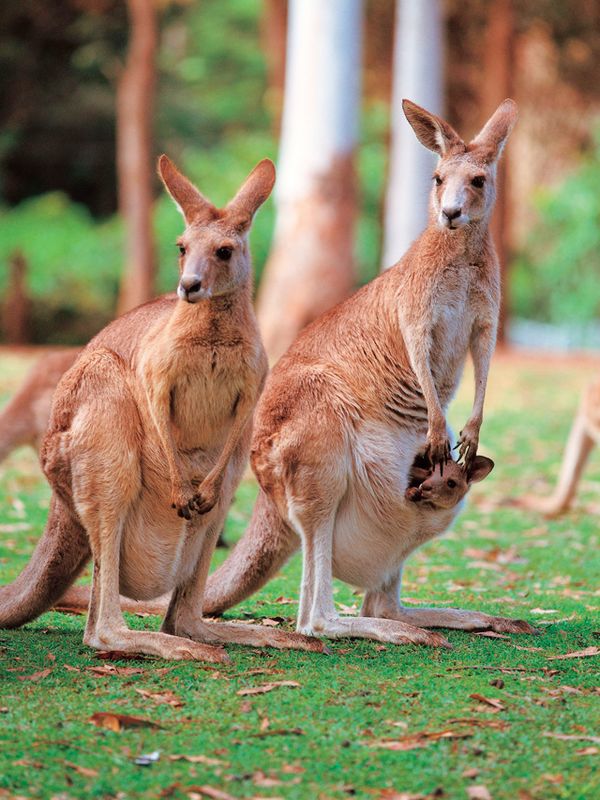 Think Australia, think kangaroos: these marsupials appear on the Aussie coat of arms, on the country’s currency and on the tail of all Qantas Airlines jets. There are four species of kangaroo in Australia, but the red kangaroo is the one we typically think of. These creatures can grow up to 6’7″ tall, weigh as much as 200 lbs., and move as quickly as 44 mph over short distances.

Kangaroos sport a number of biological adaptations to help them survive in Australia’s hot, arid climate, including a network of blood vessels on their forelimbs to help cool themselves during the scorching afternoon heat. They’re also social creatures, moving about in groups known interchangeably as mobs, troops and, yes, courts. When kangaroos fight, they rear up on their hind legs and attempt to use their forelimbs to grab, scratch or push their opponent. To the untrained eye, it looks like two prizefighters in the ring, a phenomenon that gave birth to the myth of the boxing kangaroo.

You’ll have to travel far into Australia’s great red center to find this diminutive desert-dweller in its native habitat. Fully grown male bilbies can reach almost two feet long and weigh about as much as a rabbit, but most specimens are much smaller. Bilbies are prolific burrowers, creating multiple temporary homes for themselves across their home range and staying in whichever burrow is closest when it’s time to go to bed. For the nocturnal bilby, bedtime comes around dawn, which allows it to hide from the blistering midday sun.

Perhaps its most fascinating adaptation to the desert is the fact that the bilby obtains all its water from its food and never has to find watering holes. The little bilby used to be widespread across the Outback, but today, it’s classified as a vulnerable species. Some conservationists are helping it make a comeback, both through the Australian government’s successful Western Shield program and through attempts to market the “Easter Bilby” as a native Australian alternative to the Easter Bunny. 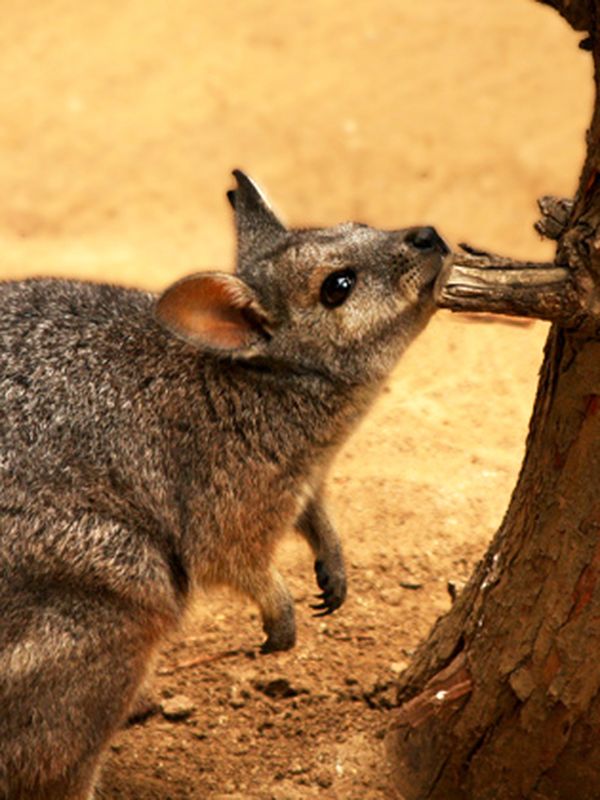 The term “wallaby” is something of a catch-all. There are about thirty species of wallaby, and the best definition anyone’s come up with is a marsupial that’s smaller than a kangaroo or a wallaroo. Because of their small size, wallabies were once the victims of exotic predators including foxes, hounds, and house cats. Today, though, wallaby populations across Australia have rebounded thanks to concerted efforts by conservationists. With so many different types of wallaby, even scientists have to come up with inventive ways to tell them apart. So if you find yourself in Australia, keep an eye out inventively named variants including the bridled nail-tail wallaby, the dusky pademelon, and the monjon. 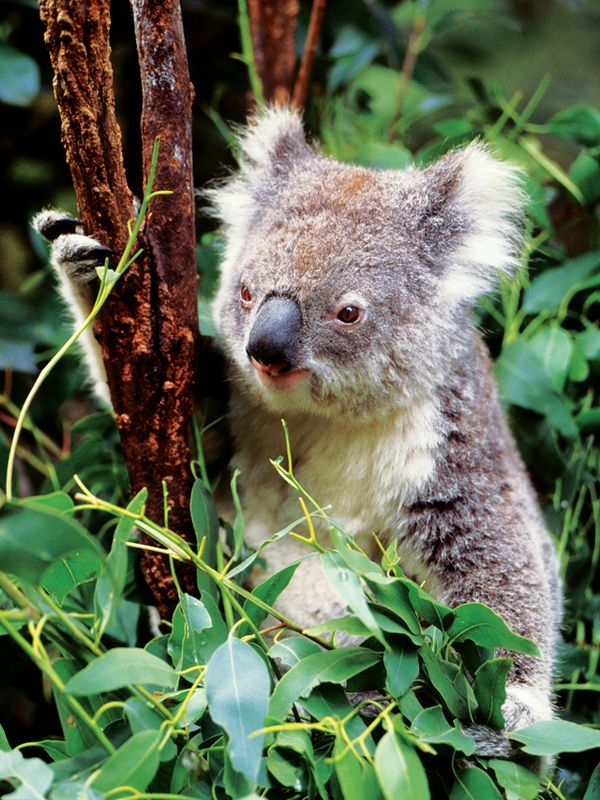 Spot these animals on our tours to Australia

Looks can be deceiving, and the cuddly but territorial koala proves it. But territorial isn’t the same thing as aggressive, and if koalas had their druthers, they’d happily spend all day chomping on eucalyptus leaves in the treetops. The furry little marsupials live almost entirely on eucalyptus, a plant that’s toxic to most other animals. Koalas have built up special defenses against the toxins in eucalyptus, but the leaves are still low in nutritional content and may create a slight narcotic effect despite the koala’s evolutionary adaptations. The end result is a creature that eats until it sleeps and then sleeps until it eats: koalas typically spend 16-18 hours per day motionless and 3-5 hours per day eating. Which, come to think of it, doesn’t sound half bad. 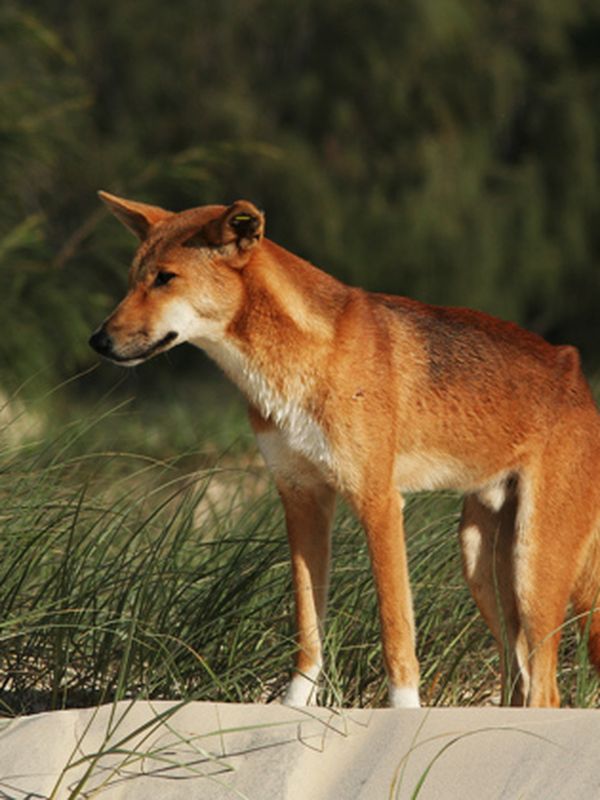 Also known as the warrigal, the dingo is Australia’s largest predator. Dog lovers will adore these tawny-colored canines, and domesticated dingoes are kept as pets throughout the country. But the dingo was once viewed as an inveterate pest, and Australians went to extraordinary measures to eradicate them. The Dog Act of 1852 explicitly “encourage[d] the destruction of native dogs” and bolstered an existing bounty on dingo hides, but ranchers continued to lose livestock to the dingoes. So the ranchers and their political allies resorted to poisoning dingoes near population centers in Australia’s southeast; this still wasn’t enough for the ranchers, and in 1885, they completed the Dingo Fence, a series of barriers stretching from the Darling Downs region outside Brisbane all the way to the Eyre Peninsula on the Great Australian Bight. At 3,488 miles, the Dingo Fence is among the longest manmade structures on Earth, and it nearly completely sequesters southeastern Australia from the rest of the country. Today, humans interact with dingoes in a more humane manner, but there’s still a psychological barrier between people and the wild dogs of the Australian Outback.

Somewhere between a wallaby and a kangaroo, you’ll find a wallaroo. They’re nearly indistinguishable from their larger and smaller cousins, but you can pick out a wallaroo by paying attention to their forelimbs and shoulders. Unlike kangaroos and wallabies, wallaroos tend to keep their “hands” in one spot, with their elbows tucked in close to their bodies and their shoulders thrown back. Like kangaroos, wallaroo mothers keep their babies in their pouch, where the young (called joeys) can nurse; unlike kangaroos, wallaroos live alone throughout their entire adult lifetimes. And while kangaroos spend most of their days in the open expanses of the Australian Outback, wallaroos seek shelter from the heat in cool caves.

You can see these animals and many more on one of our Australia tours.