Get inspired: The places behind the paintings

Certain destinations around the world have a unique, captivating quality about them. These stunning locations often spark the creativity of artists who strive to demonstrate the beauty of each one through their work. Here, we take a look at the places behind the paintings: the incredible scenery that inspired four famous works of art.

Located about 50 miles northwest of Paris, Giverny is an idyllic French village known for its most famous resident: Claude Monet. The Impressionist artist lived and worked here from the 1880s until 1926, finding inspiration in open-air scenery. The tranquil greenery of Monet’s Giverny estate served as the setting for much of his later work. He cultivated beautiful gardens and a water lily-filled pond, complete with a wisteria-covered, Japanese-style footbridge and willow trees lining the banks. As the colorful flowers rippled in the water and the light shifted throughout the day, Monet would study these changes and capture the scene in his paintings. This Water Lilies series—which consists of around 250 paintings—conveys a sense of peacefulness that comes when surrounded by nature.

See the artwork: While you can find different Water Lilies paintings from the series at museums all around the world, the ideal viewing place is at the Musée de l’Orangerie in Paris. Here, eight massive canvases stretch across the walls of several oval-shaped rooms, creating the calm and reflective space that Monet intended.

Add the Monet & the Landscapes of Giverny optional excursion to your Paris: The City Experience tour

The historic city of Toledo, situated south of Madrid in central Spain, is recognized by UNESCO for its multicultural heritage. Over the past 2,000 years, it has been a hilltop fortress, an imperial capital and a religious and intellectual center. During the late 16th century, the famous artist El Greco settled in Toledo after leaving his home of Crete and studying with masters in Italy. He produced many masterpieces while residing here, including one of his most significant works: View of Toledo. This depiction of the city where he lived and worked is actually considered the first Spanish landscape painting. With his trademark dark colors, El Greco captured the cityscape, surrounded the Tagus River and rolling green hills, all under a stormy sky. While not as overtly religious as many of his other paintings, the gloomy scene has spiritual undertones that hint at the influence of the Roman Catholic Counter-Reformation during this time period.

See the artwork: View of Toledo can be found in New York at the Metropolitan Museum of Art, and other works by El Greco can be seen during a visit to the sacristy of the Toledo Cathedral.

Add the Toledo optional excursion to your Grand Tour of Spain

Arles: Terrace of a Cafe at Night by Vincent van Gogh

A culturally important city since the time of the Roman Empire, Arles is filled with ancient structures and winding medieval streets. Place du Forum, the French city’s historic heart, was famously captured by Vincent van Gogh in his painting Terrace of a Cafe at Night. The troubled Dutch artist called Arles home from 1888 to 1889 and produced a great amount of pieces during this time, ranging from landscapes to portraits to his Sunflowers series. In the nighttime scene of Terrace of a Cafe at Night, Van Gogh captured a typical evening in the central square as people enjoyed drinks at the corner cafe and strolled through the cobblestone streets. With dark blues illustrating the sky and warm shades of yellow and orange within the street scene, he evokes a lovely night spent by locals in Arles.

See the artwork: Along with many of Van Gogh’s other works, this oil painting can be viewed at the Kröller-Müller Museum in the Netherlands. To experience the iconic setting for yourself, visit Place du Forum in Arles and look for the yellow Café Van Gogh.

Enjoy a stroll around Arles on our Provence Walking Tour

Since ancient times, the nearly perfect form and staggering natural beauty of this mountain in Japan has attracted everyone from pilgrims to poets. At an imposing 12,399 feet, Mount Fuji can be seen from surrounding villages and towns—and even from Tokyo on a clear day. During the Edo period in the 1830s, Katsushika Hokusai was one of many Japanese artists inspired by the sacred site. Using a technique called ukiyo-e (which translates to “pictures of the floating world”), he created a series of woodblock prints that captured thirty-six views of the massive Mount Fuji. One print in particular has gained worldwide recognition: The Wave off Kanagawa, which is more commonly known as The Great Wave. Instead of featuring the towering mountain prominently, Hokusai played with perspective, placing it in the distance beneath the crest of a huge wave in the foreground.

See the artwork: Since The Great Wave is actually a woodblock print—not a painting—there are several different copies in collections around the world. It’s recently been exhibited at the British Museum in London, the Metropolitan Museum of Art in New York City and the Museum of Fine Arts in Boston.

Take in the stunning views from Mount Fuji on our Highlights of Japan: Kyoto to Tokyo tour

Have you ever been to a breathtaking destination that inspired a famous work of art? 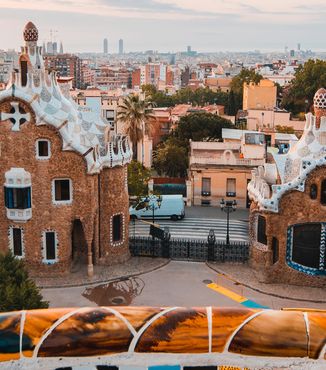 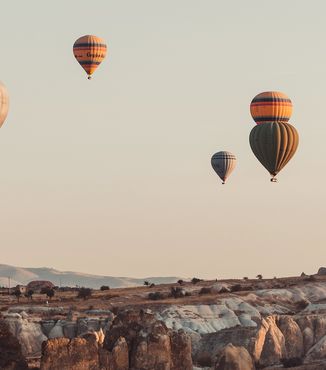 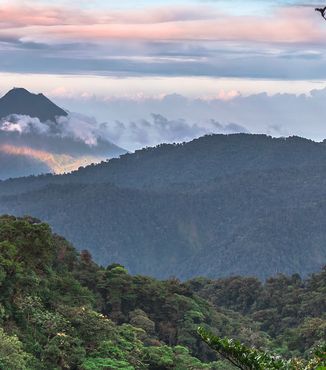 Explore the world on tour