Why go guided to the Alhambra in Spain

Striking, colorful, and sprawling, the Alhambra is a can’t-miss destination for anyone traveling on a Spain tour. This palace complex in the medieval section of Granada combines incredible architecture with beautiful views of the city below for an undeniable wow factor. Here are three reasons to go guided when exploring the Alhambra.

1. Learn the history from a local

At the Alhambra, there’s so much to discover—and plenty of ground to cover. A knowledgeable local guide leading the way makes all the difference. The site dates back to the 800s, when it was a citadel atop Sabikah Hill. It remained a fortress until the 13th century, when Mohammed I established the Alhambra as a royal residence for the ruling Arab Muslims. The word Alhambra roughly translates from Arabic to “the Red One” or “the Red Castle,” drawing on the hue held by its clay walls.

Each successive ruler continued to expand the palace, resulting in many interconnected buildings that could be used for public, political, or private purposes. In 1492, Queen Isabella I and King Ferdinand II imposed Catholic rule in the region and took over the Alhambra. The ensuing Christian influence mixed with the Islamic architecture, both of which can be seen today thanks to restoration efforts over the past several centuries. 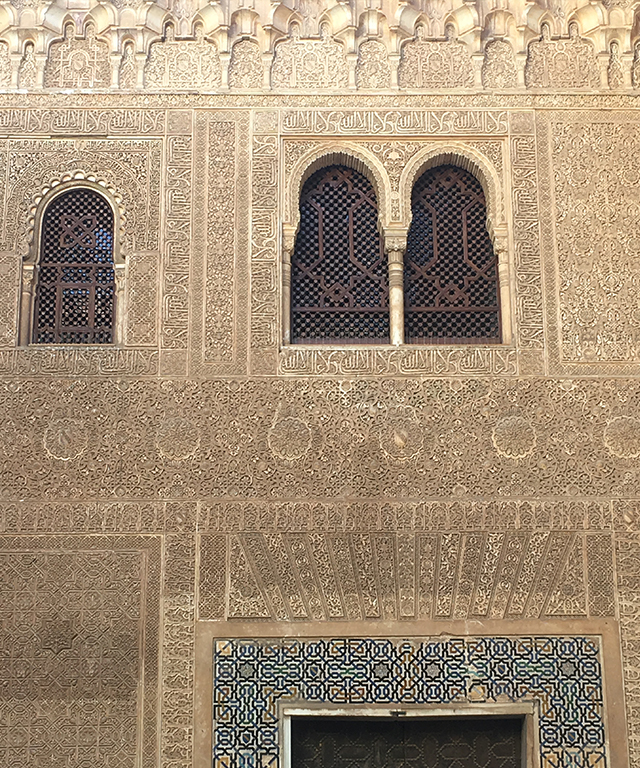 2. Take in the stunning scenery

Since you’ll be listening to your guide rather than reading your guidebook, you can focus on admiring the remarkable sights all around you. The Alhambra is a shining example of art from the Nasrid Dynasty, the final Islamic kingdom on the Iberian Peninsula that flourished from the 13th to 15th centuries.

The style of architecture features decorative elements like ceramics, plaster, wooden carvings, and more. While exploring the palace, a UNESCO World Heritage site, you’ll find these incredible details everywhere. Intricate inscriptions and colorful, geometric patterns of tiles can be spotted no matter where you turn, from the walls to the columns to the ceilings.

After walking through the palace complex, don’t miss the neighboring gardens of the Generalife. This area was once a royal retreat, and you’ll feel a sense of serenity as you stroll through it. Though it has been changed throughout the Muslim and Christian periods of rule, the Generalife showcases a mix of both aesthetics and innovative gardening techniques.

3. Skip the lines—and the logistics

Since the Alhambra is one of Spain’s most popular destinations (for good reason!), it’s become more and more difficult for travelers to pay a visit. A restricted number of tickets are available each day in order to preserve the site.

When you visit the Alhambra on a Spain tour, you don’t have to worry about the hassle of making reservations in advance or waiting in a long line. Your ticket will be purchased as part of your trip, so you’ll be able to skip the line, meet your guide, and head into the Alhambra to explore right away when you arrive.

Experience the Alhambra for yourself on one of our Spain tours.