Where to see American bison

The American bison is now officially the national mammal of the United States, thanks to a decree from President Obama in May. 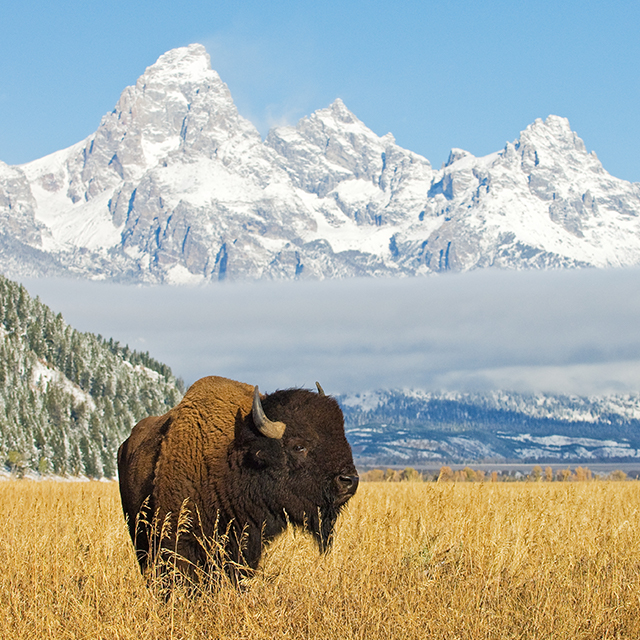 So why are these massive animals important? The largest animal on the continent, bison once roamed the areas between New England and the southern Mexican states in enormous herds. They are a popular symbol of the Plains States, a sacred animal to the Lakota tribes that occupy the region and lend their name and likeness to cities, towns, universities, currency, and a variety of products.

It is estimated that 60 million bison once dotted the plains, and today that number hovers around 500,000. They have evaded extinction thanks to protective legislation and the establishment of game preserves.

If you’re wondering about the difference between a bison and a buffalo, there isn’t one. The American bison is the same animal as the American buffalo, but many consider the name “buffalo” a misnomer, borne out of the creature’s similarities with water buffalo and African buffalo. “Bison” is a Greek word, while the term “buffalo” is thought to have originated from French fur trappers who called them boeufs —both words describe an ox-like animal.

Where to see American bison

Bison have inhabited the area that is now Yellowstone National Park since prehistoric times, and today their numbers reach almost 5,000. The herd here (which is actually divided into two sub-groups) is quite possibly the oldest and most pure public bison herd in the U.S.

Alongside the badgers and the bobcats, the stunning landscapes of the Badlands also harbor a herd of bison. Nearby Theodore Roosevelt National Park is named for the man who helped protect these important animals and is home to its own herd.

Where do you want to spot an American bison? Tell us on Facebook!