Our planet is home to countless landmarks that boggle the mind with their staggering beauty, storied history, and groundbreaking engineering. But some of them are so special—and so emblematic of the historic periods, peoples, and advancements they represent—that they’ve been declared wonders of the world.

So, what are the New Seven Wonders of the World? Read on to find out—and take advantage of our Black Friday travel deals to book tours that can get you to the ones you most want to see. 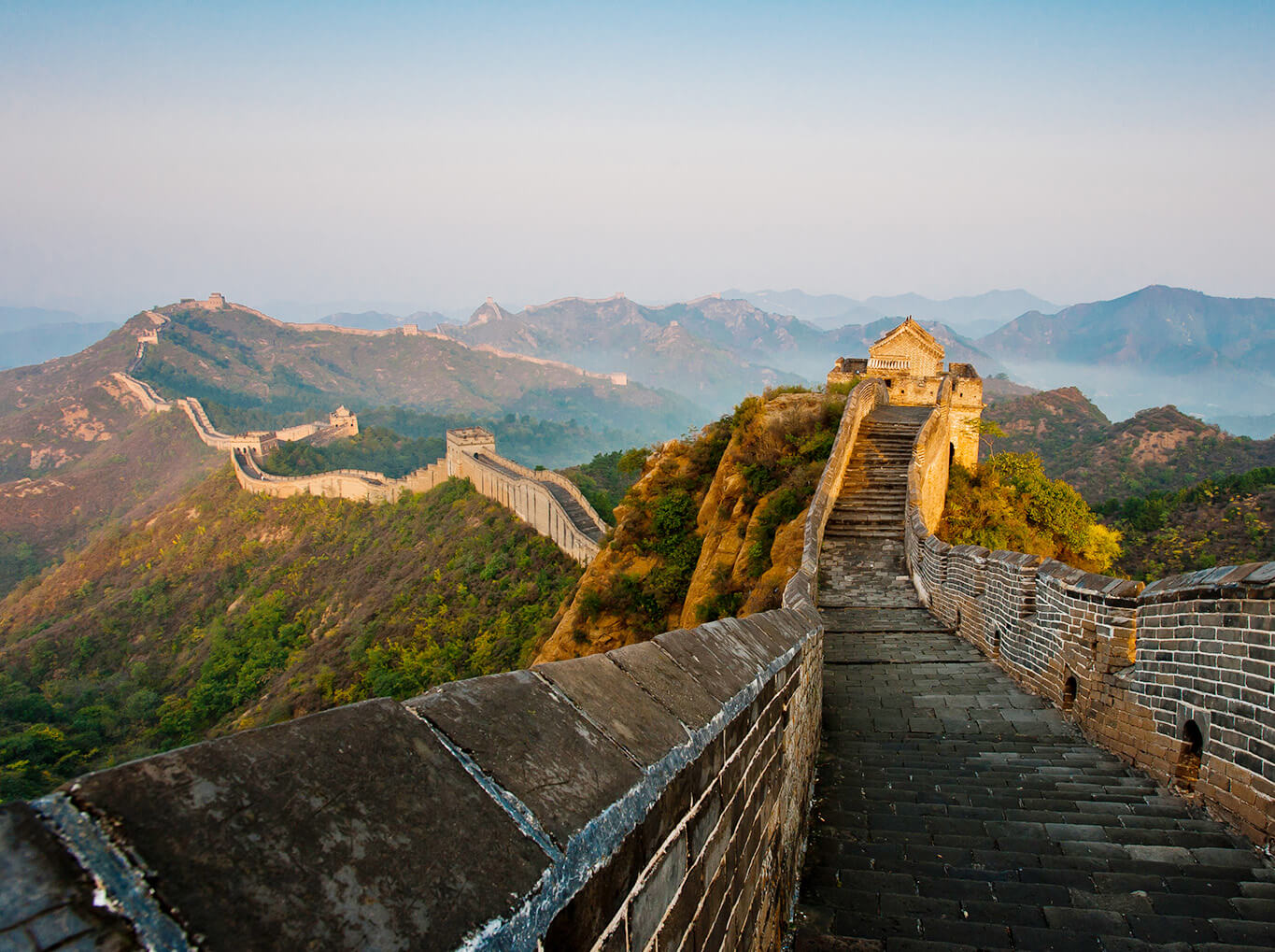 1. The Great Wall of China

Constructed over the course of 2,300 years, the Great Wall of China—the largest of the seven wonders of the world—has been the subject of debate, from its length to its visibility from space. (Astronauts have said that it’s practically microscopic from that high up.) One thing’s for sure, though: The Great Wall of China is worthy of its ranking among the seven wonders of the world. That’s thanks in part to its deceptive beauty, as staffer Nilsen discovered while on our China: Beijing, Yangtze River Cruise & Shanghai tour. “Up close, it’s angular, hard, and made of stone,” he said of the serpentine structure. “As you look across the mountains, however, it appears as if it flows smoothly over the landscape.”

Staffer Ketsia was struck by a strategic detail of the wall’s design. “The stairs were intentionally unevenly built as a tactic against invaders,” she said. The scenery around the wall wowed Ketsia, too. “I am afraid of heights, but being able to see the surrounding views was truly worth it,” she said.

For travelers hoping to enjoy this world wonder without crowds around, savvy staffer Priscilla suggests traveling to China during shoulder season. “I visited China in November, so there were no crowds and I could really feel all of the Great Wall’s wonder and history while I was walking along it,” she said.

See the Great Wall on tour 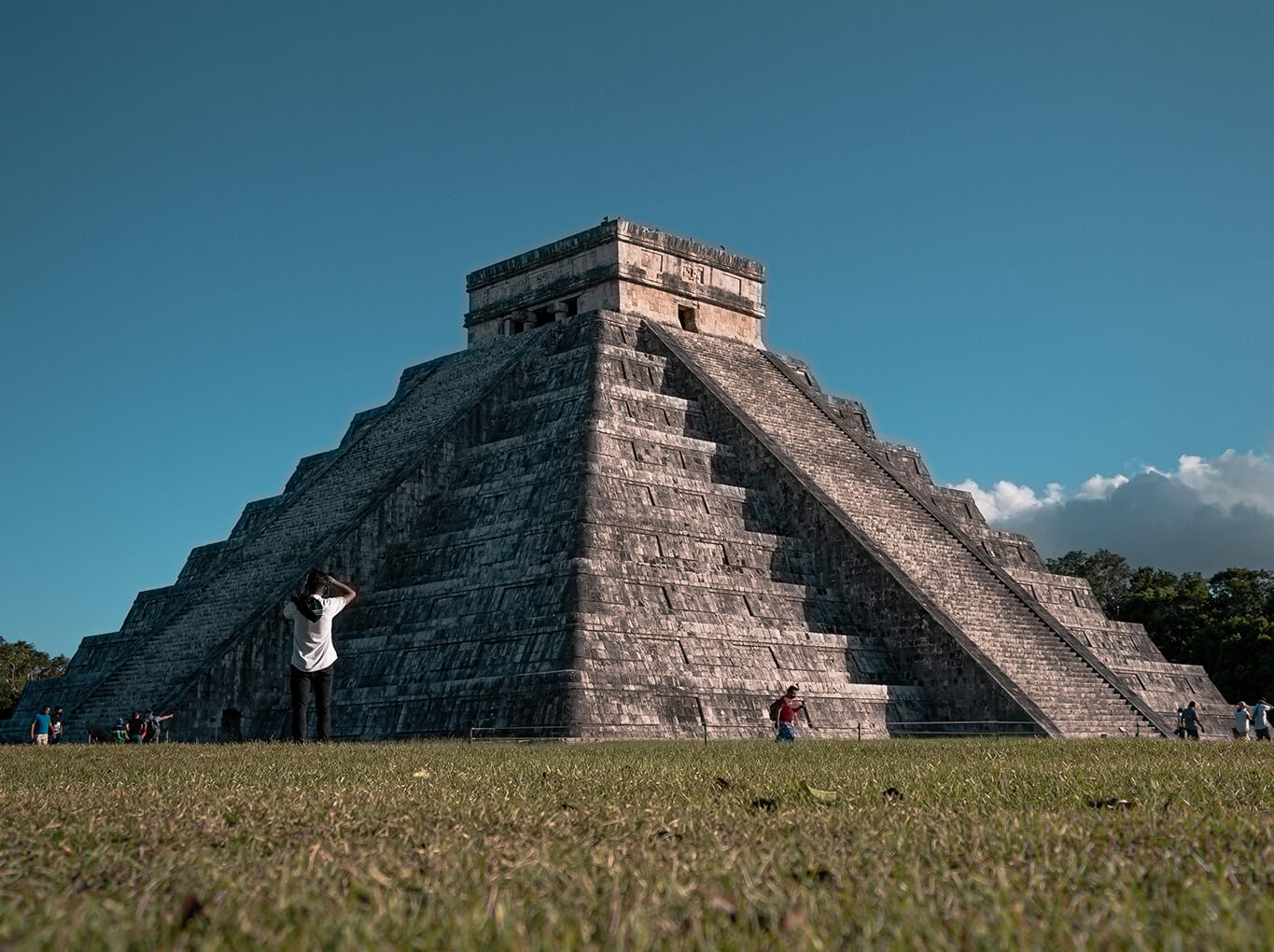 A treasure trove of Mayan artifacts on the Yucatán Peninsula

In 2007, UNESCO named Chichén Itzá—an archaeological site on Mexico’s Yucatán Peninsula—one of the New Seven Wonders of the World. An important city-state in pre-Hispanic America, Chichén Itzá is now among the most visited archaeological sites in Mexico. It’s home to 26 Mayan ruins, but the well-preserved pyramid known as El Castillo has become symbolic of the site. Its construction is nothing short of impressive. “The way the pyramid was designed in combination with the city creates natural acoustics,” said staffer Kristin. “That way, you can hear what people are saying from the other side of the pyramid.” Want to experience the phenomenon for yourself? Add the Yucatán Peninsula extension to our Highlights of Mexico: Oaxaca to Mexico City tour and visit during your free time. Or, you can ask our travel planners to arrange a pre- or post-tour stay in the area for one of our tours to Mexico, or to plan a Customized Tour for seven or more travelers. 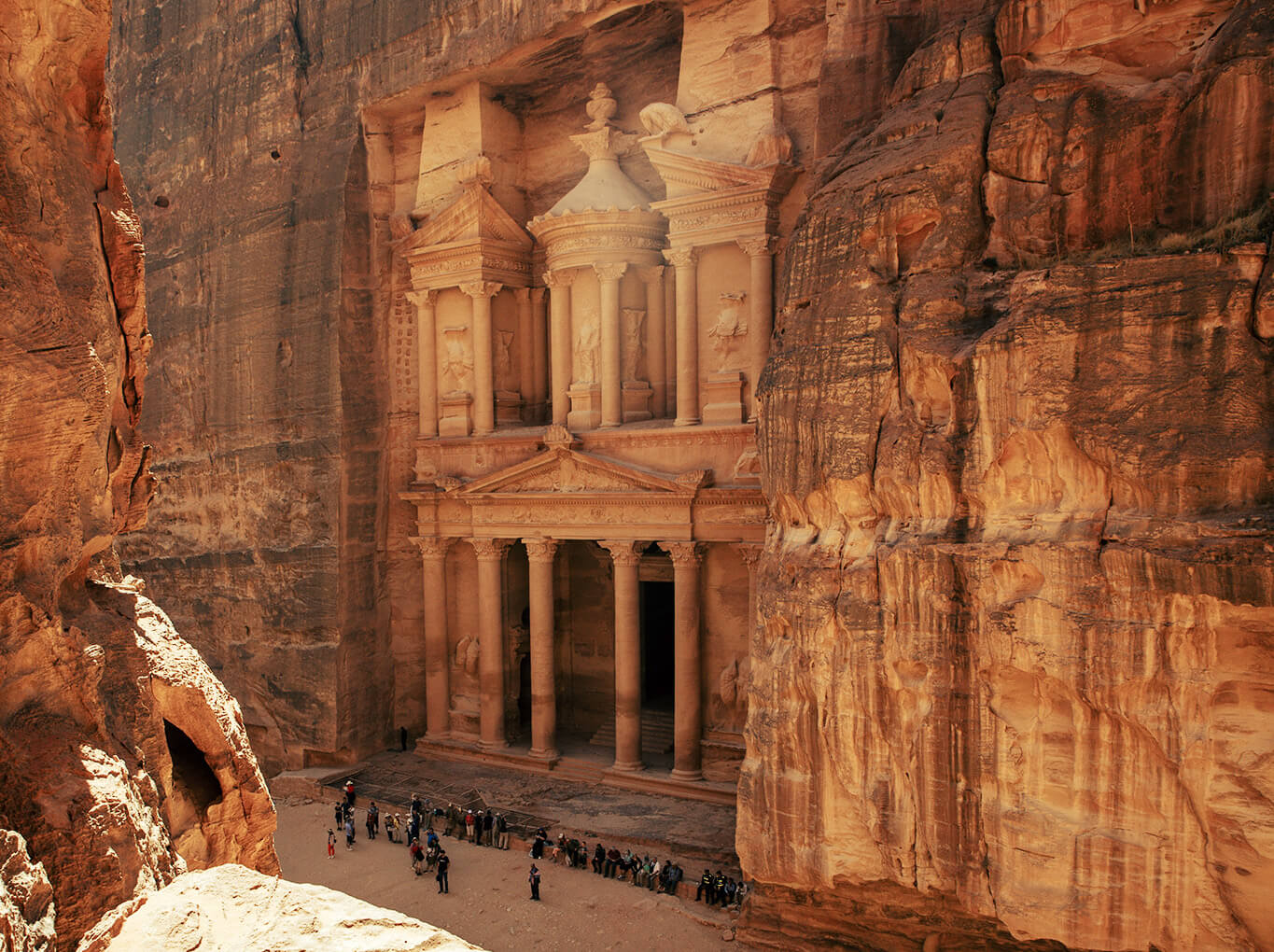 It may be known best for its towering Treasury building—carved into a red, sandstone hill in the second century C.E. by ancient Arab people known as the Nabataeans—but there’s actually more to Petra, a prehistoric trading center in Jordan and one of the Seven Wonders of the World. “If you’re fit enough to take a hike at Petra when you travel to Jordan, the real hidden gem is what’s referred to as the monastery,” said staffer Kristin. “It’s about a 45-minute or hour-long hike up to get there, but if you’re looking to get some iconic pictures with far fewer crowds, it’s worth it. Be prepared, though: The hike isn’t easy!”

Staffer Christina visited Petra in 1995, shortly after a peace treaty was brokered between the State of Israel and the Hashemite Kingdom of Jordan—and before the site made its way onto most travelers’ radar. She returned in 2009 to find Petra abuzz with visitors. “Suddenly, a city had arisen outside of the entrance to Petra, where, before, there had been one hotel,” she said. For Christina, despite this commercial development near Petra since her previous visit, “The size, the impression of Petra, the awesomeness of the idea of a forgotten city was no less.” 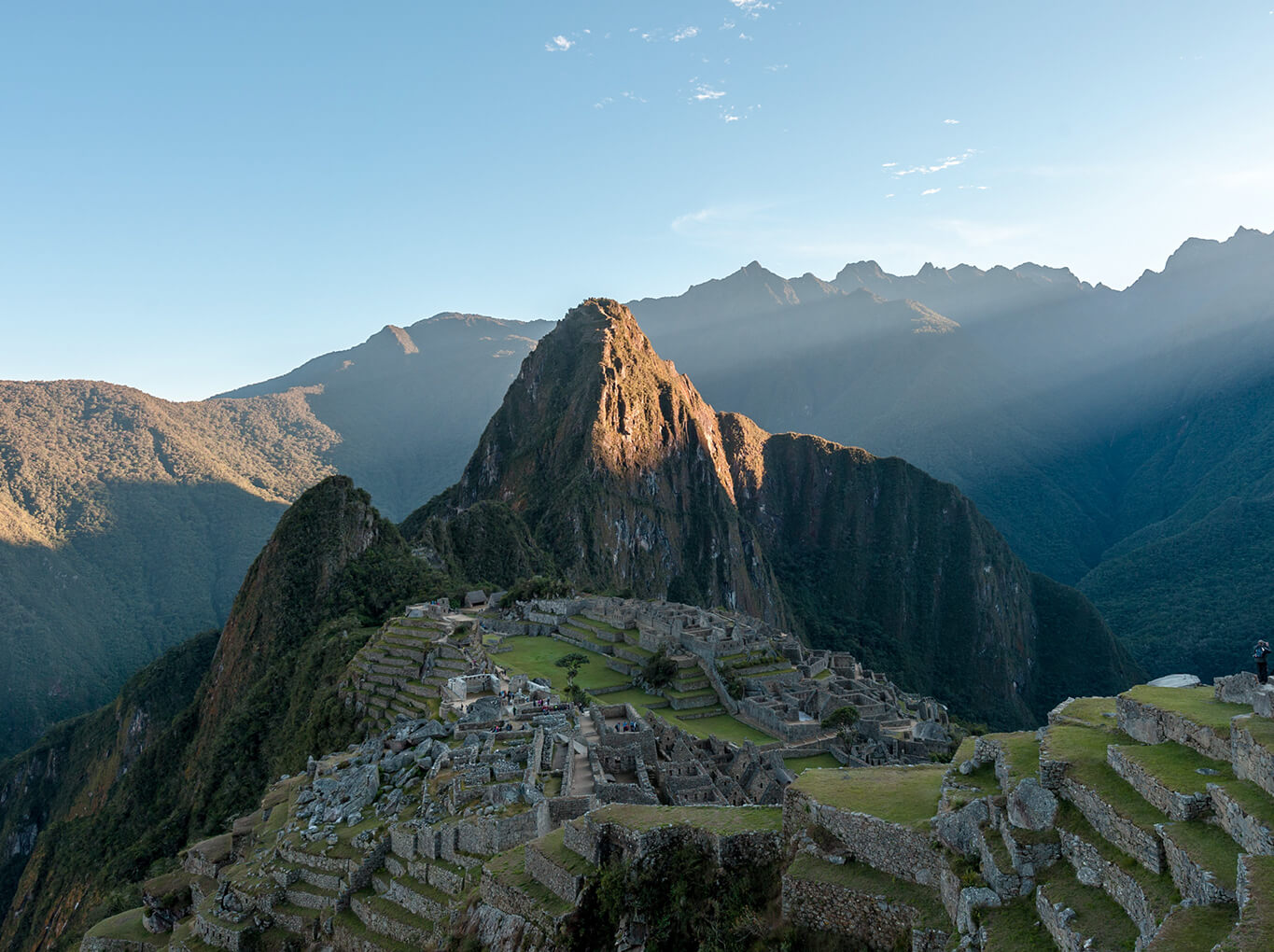 A once-hidden citadel high in the Andes

Considering its sophisticated design, its seemingly impossible engineering, and its remote setting high in the Andes Mountains, Machu Picchu deserves its designation as one of the Seven Wonders of the World, as travelers will discover on our trips to Peru. Staffer Shannon visited the 15th-century Incan citadel on our A Week in Peru: Lima, Cuzco & Machu Picchu tour and was left haunted by a particular period in its past. “This city was lost at some point—like, completely forgotten by humanity,” she said of the site, which remained hidden from the world until explorer Hiram Bingham came upon it in 1911. “It’s terrifying to think about that, but it puts a lot into perspective. This isn’t just a place where you can get that quintessential Instagram pic—it has a ton of history that more people should know about.” Plus, she adds, “It was jaw-droppingly gorgeous... the feat of building it at the top of a mountain with steep cliffs off both sides is also unreal.” 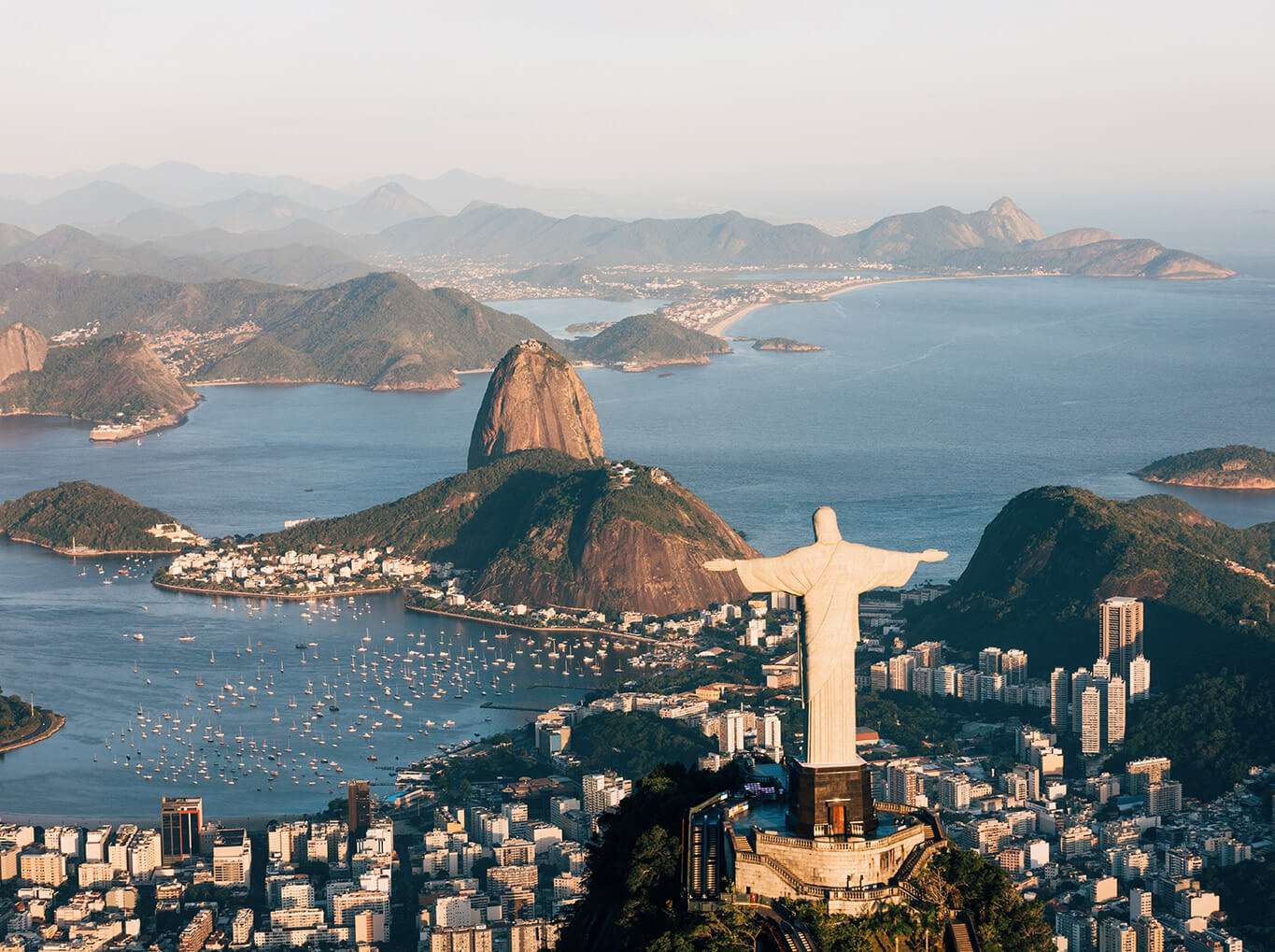 A symbol of Christianity watching over Rio de Janeiro

When it comes to the Seven Wonders of the World, Christ the Redeemer stands head, shoulders, and open arms above the rest. Constructed between 1922 and 1931, the 98-foot-tall Art Deco statue of Jesus Christ towers over Rio de Janeiro, Brazil, from the top of Corcovado mountain. But, for travelers on our trips to Brazil, the thrill of seeing this world wonder begins before reaching Corcovado’s peak. “One of the most exciting things before visiting this site was spotting it from the city streets,” said staffer Alex. “Arriving in Rio, looking up from the taxi window, and seeing how magnificent it looks standing on top of the mountains made me even more eager to get there.” For Alex, going to the top of the mountain to see the statue up close proved worthwhile. “It’s almost surreal, climbing the last steps to the top. The statue itself is majestic and almost calming,” she said. “You can stroll through the whole sky-high platform and observe the breathtaking views of the city and ocean below. Definitely a must-see when traveling to Rio de Janeiro!” 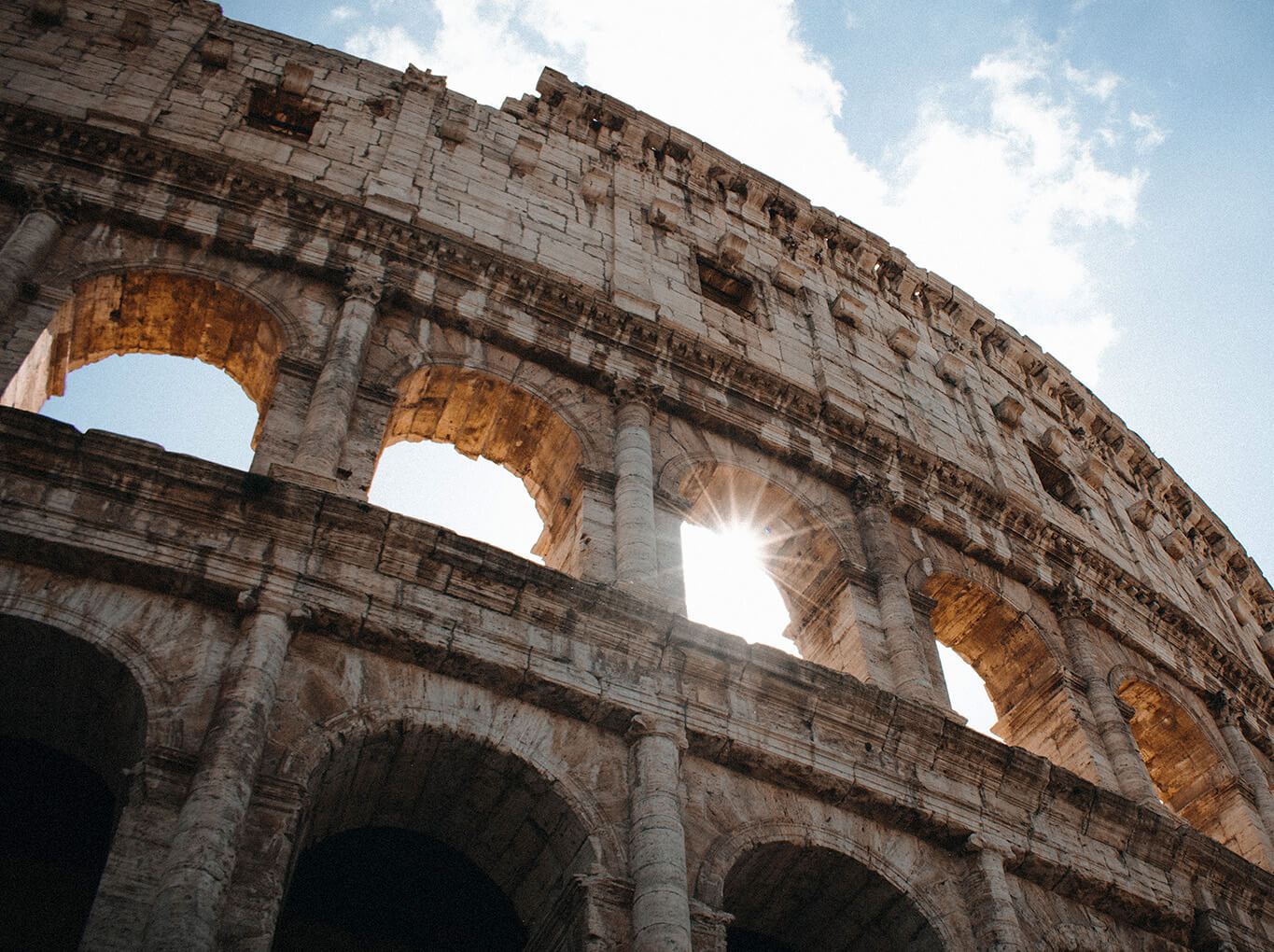 A grand arena built for entertainment of epic proportions

Although they won’t see gladiators battling it out or hear the roar of a rowdy crowd in the stands, it’s all easy to imagine for travelers on our Rome tours who visit the Colosseum, the only one of the Seven New Wonders of the World located in Europe. The nearly 2,000-year-old icon of Rome may have been the largest amphitheater built during the Roman Empire, but staffer Ren, who explored it on our London, Paris & Rome tour, delighted in some of its smaller, surprising details. “It was fascinating, learning that the many, many holes in the Colosseum weren’t due to invaders, but due to citizens looking for valuable raw material to repurpose,” they said. "That stood out to me the most... to see it pockmarked full of holes, thinking there was some larger-than-life story behind it all, only to learn the answer was much simpler and more human than you’d initially think.”

Perhaps none of the wonders of the world have influenced modern design the way the Colosseum has, according to staffer Justin. “It was amazing to see how some features of the Colosseum reminded me of any modern stadium and how much has survived for all of these years,” he said.

See the Colosseum on tour 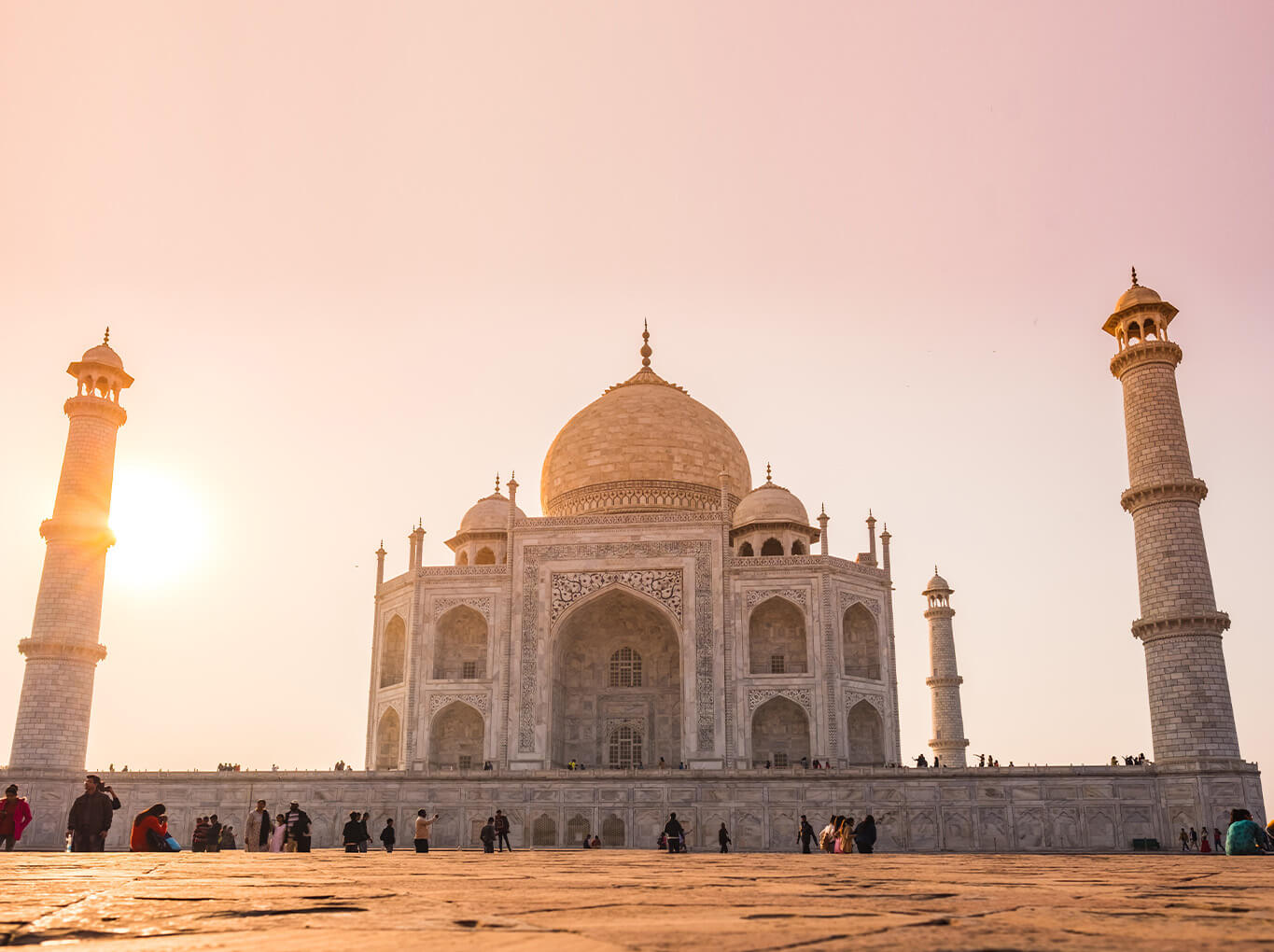 A larger-than-life expression of love

If you’re an architecture buff—or a hopeless romantic—consider putting the Taj Mahal on your Seven Wonders of the World travel wish list. In the 17th century, Mughal Emperor Shah Jahan commissioned the massive mosque in memory of his wife, Mumtaz Mahal. Nearly 400 years later, what originated as a grand, architectural expression of love remains one of the most revered and celebrated sites to visit on our trips to India.

“What was truly incredible about the Taj was the lingering thought that it was built well before the United States became an independent country,” said staffer Gustavo, who visited the Taj Mahal on our India: Delhi, Agra & Jaipur tour. Staffer Avani, whose family hails from India, agrees. “There’s a reason it’s one of the seven wonders of the world,” she said. “All of the stones are carved so perfectly and intentionally. It’s so magnificent and holy. You can tell it was a labor of pure love and dedication. There’s truly nothing like it.”


See the Taj Mahal on tour

Explore these wonders of the world on tour—and save a little while you’re at it with our Black Friday travel deals before they’re gone. About the author | Lindsay Day
A devoted aisle seat-sitter, Lindsay first traveled overseas—to Italy and Greece—with EF as a high school sophomore. Since then, she’s visited nearly 60 countries on six continents (one of these days, Antarctica!). When she’s not in the office (or on the road), she’s probably cooking up a new plant-based recipe or biking on a local rail trail.

Visit the wonders of the world on tour