Traffic and Communications Director Lynne S. chose to visit Croatia because of the many natural wonders found there—but discovered a lot of history and tradition along the way. Here, she shares five of her favorite moments on tour. 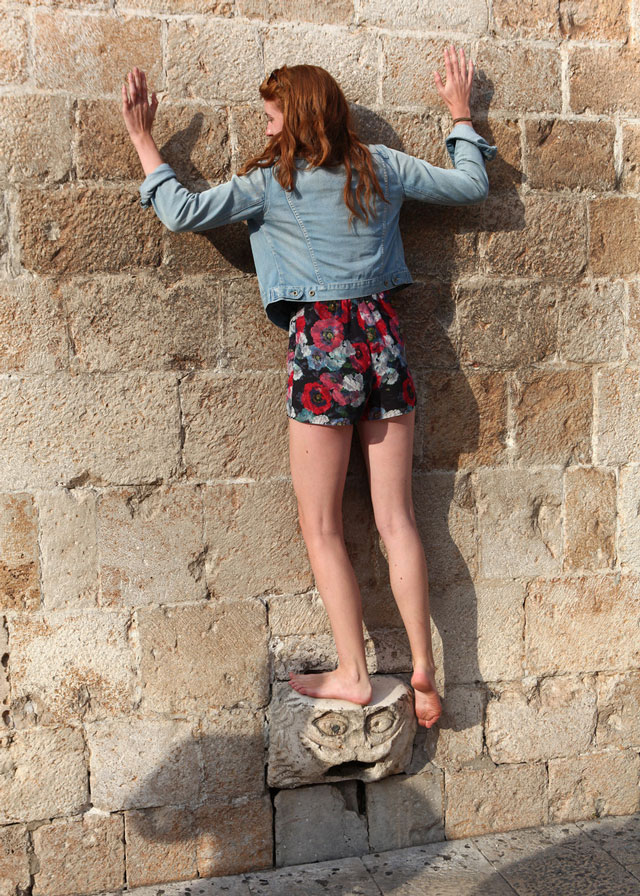 “But one of the more interesting customs I learned about in Dubrovnik was that of the balancing stone. Along the city’s wall, there is a carved stone face sticking out of one of the buildings, facing into the main street about a foot or so off the ground. The story goes if you can balance on it the stone and take off your shirt without falling off, you will find true love! It looks so easy… until you try it!” 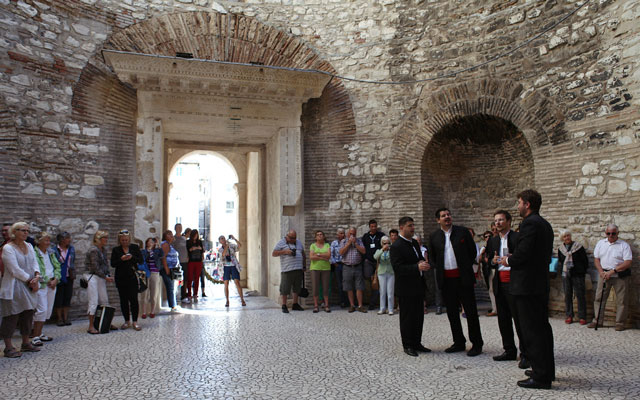 “Everywhere you look in Split’s Old Town you see newer buildings intertwined with the old ruins of Diocletian’s palace. One of my favorite experiences on tour was walking through the Old Town and running into a group of men singing Croatia’s traditional Klapa music in the middle of the old ruins. Klapa music is a form of a cappella that refers to a group of people singing about love, wine, country and sea. This traditional music has endured through the years and is surprisingly still very popular with mainstream audiences.” 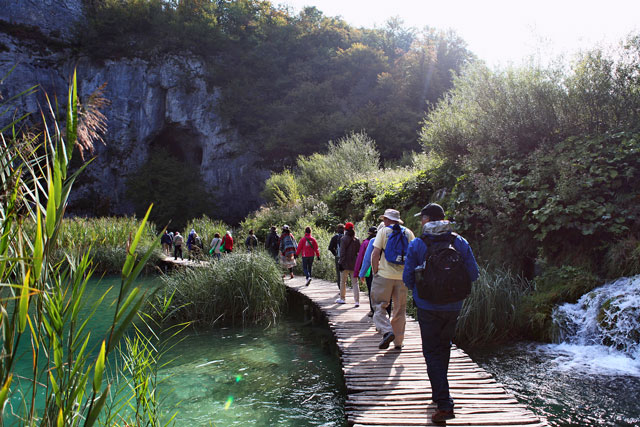 “One of the reasons I chose to take this trip was to see Plitvice National Park. I had seen photos of this unbelievably beautiful place and wanted to experience it for myself. While it was even more beautiful in person than the photos I had seen, that was not the only interesting thing about this park and its famous lakes. It has been a National Park since 1940 and a UNESCO World Heritage Site since 1970. Because it is so protected, its 16 cascading lakes are pristine and there are over 75 endemic species in the park that can’t be found anywhere else. The water is an unbelievably blue-green aqua color due to the calcium carbonate found in the limestone of the surrounding mountains.” 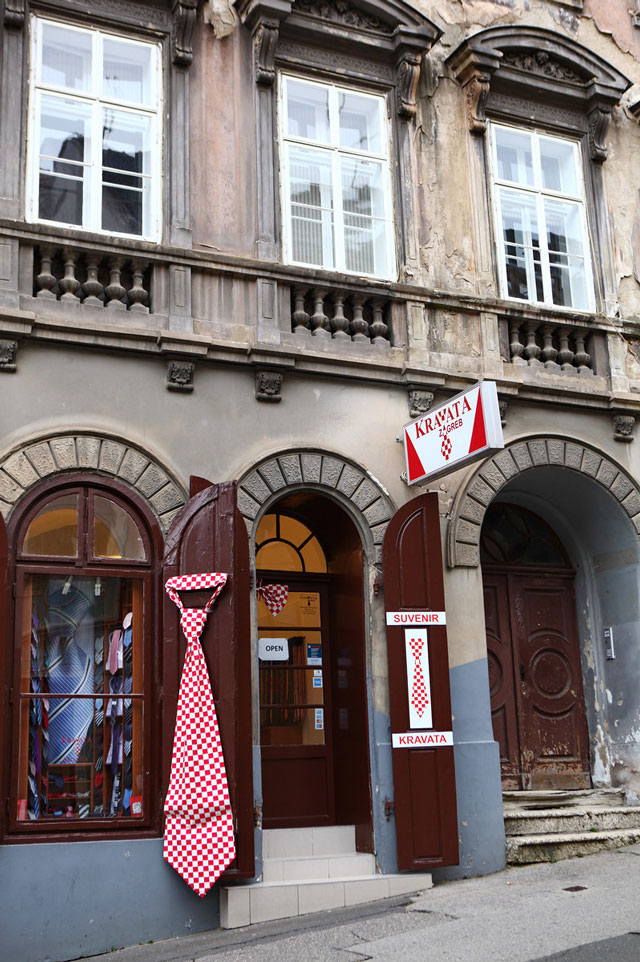 “What we know as the modern day necktie originated in the 1630’s as part of Croatian military attire. The scarves distinctively knotted at the Croates’ necks piqued Parisian interest. The French dubbed them ‘cravat,’ derived from the French pronunciation of ‘Croate.’ The Croates are still wildly proud of being the originators of this popular trend, and you can see ties in all fabrics, shapes and sizes throughout Croatia. There is even a National Cravat Day celebrated every year on October 18.” 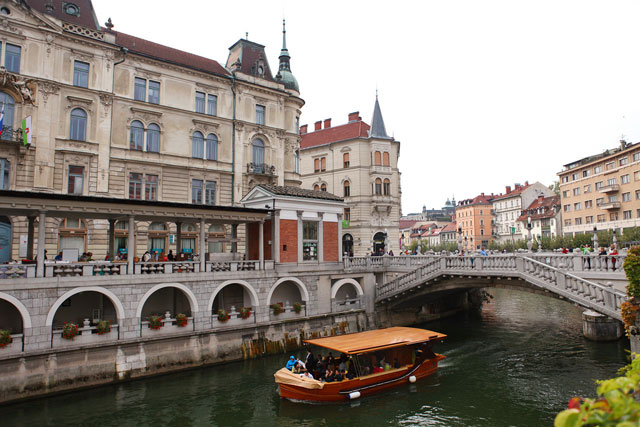 “Each of the many bridges in Ljubljana has its own story. There is Triple Bridge, which is literally three bridges crossing the same place on the river, built when it was decided that the single bridge could not handle all the traffic. Then there is Dragon Bridge, which houses the famous symbol of Ljubljana. The history of the iconic monster dates back to tales of Jason and the Argonauts when the gallant Jason is said to have fought bravely against the beast before finally slaying it. Finally, there is Cobblers Bridge, or Shoemakers Bridge. In the Middle Ages cheating bakers were dunked in the Ljubljanica from Cobbler’s Bridge—cheating on the weight of bread was punished with a very cold bath and public humiliation.”

Start planning a trip to Croatia 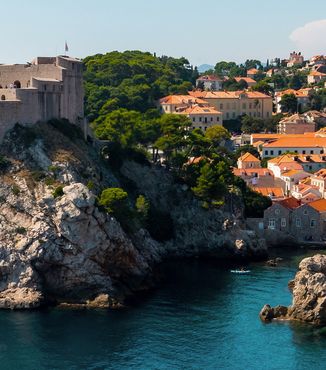 Destinations
The Go Ahead Travel Guide to Croatia 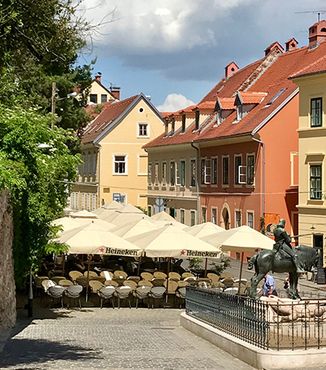 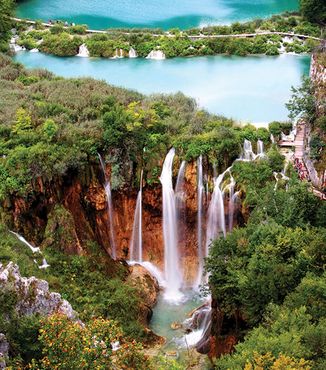