If you’re looking for a cultural experience in a distinctive destination but don’t want to travel overseas, look no farther than the Canadian Maritime Provinces. Located in eastern Canada, this area refers to New Brunswick, Nova Scotia and Prince Edward Island. Remote, unique and dramatically diverse, a trip to the Canadian Maritimes is a way to experience a fascinating place while staying closer to home. Here are some things you can look forward to on a tour to this intriguing destination. 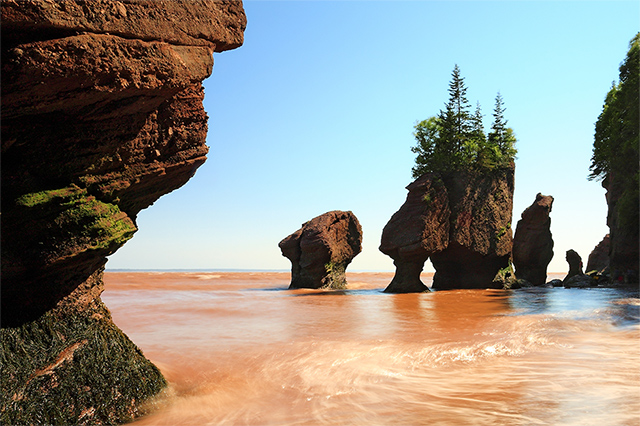 From picturesque towns dotted throughout dense stretches of wilderness to sweeping ocean views punctuated by soaring, jagged cliffs, each corner of this captivating area offers something different. A tour through the region is a way to visit remote areas that seem hard to reach, and you can take advantage of the more lengthy bus transfers by admiring all the gorgeous landscapes you’ll pass.

It’s also an opportunity to step into some of Canada’s most stunning scenery. Admire the red dunes of Cavendish Beach, which run for five miles along the Gulf of Saint Lawrence. Marvel at quaint houses and stunning ocean vistas at Peggy’s Cove, which is home to a historic lighthouse. Or, enjoy breathtaking mountain and sea views as you wind your way along the Cabot Trail through the heavily forested Cape Breton Highlands National Park.

Must see: Bay of Fundy One of Canada’s most unique, impressive landscapes can be found between New Brunswick and Nova Scotia at the Bay of Fundy. This massive natural wonder is bound by fossil-filled cliffs and boasts the largest tidal change in the world—some of which reach up to 50 feet high. Over 150 billion tons of water leave and enter the bay during every tide cycle, meaning you can actually walk on the ocean floor at low tide. There, you’ll admire soaring rock formations known as Hopewell Rocks, which have been carved by erosion as a result of the bay’s extremely powerful tides.

The Canadian Maritimes are flanked by the Atlantic Ocean, so it’s no wonder that one of this region’s most important industries has stemmed from its ocean-side location. Quaint towns and villages throughout the three provinces boast impressive fishing industries, giving these remote locations an intrigue all their own.

Pay a visit to the historic port town of Lunenburg, a UNESCO World Heritage site, to learn more about its proud fishing history. Swing by Cheticamp, an Acadian fishing village situated along the Cabot Trail. Or, stop to see Wood Islands, a rural fishing community located on the Northumberland Strait, where you can catch a ferry to Caribou, Nova Scotia.

Must visit: Lunenburg Wooden shipbuilding was another important industry in the Canadian Maritimes up until iron and steel ships took over near the end of the 19th century. The region’s dense forest provided easy access to abundant amounts of timber, and often, the fishermen would work as shipbuilders during the colder winter months. If this extensive history peaks your interest, pay a visit to the Fisheries Museum of the Atlantic in Lunenburg, which houses a small fleet of fishing vessels, an aquarium and various exhibits.

The Maritimes’ location on the Atlantic and the proud seafaring traditions come together to produce an impressive culinary scene dominated by some of the world’s highest-quality seafood. You’d be hard-pressed to find anything fresher than the fish pulled from the area’s picturesque bays, and a visit to the provinces makes trying a lobster roll, shellfish or dried dulse seaweed a must.

Not a fish eater? Not to worry—farmers throughout the region grow a variety of fresh produce. In fact, Prince Edward Island’s agricultural industry has earned it the nickname “the Garden of the Gulf.” Since potatoes are the province’s most important crop, it’s the place to go for delicious potato dishes.

Must try: Blueberries and potatoes Be sure to sample some of the region’s famous blueberries, which reach peak season in August, as well as food with Acadian influences. The French-speaking Acadians settled in the Canadian Maritimes near the end of the 16th century after migrating from France, and brought their farming traditions with them. The provinces’ abundance of potatoes turned into a culinary staple, and one Acadian dish that’s still popular in the present-day Maritimes is poutine râpée, or boiled potato dumplings with a pork filling.