Our favorite LGBTQIA+ friendly cities around the world

At Go Ahead Tours, we want to make sure all of our travelers feel welcomed and supported throughout their travel experience. That includes being able to express their true selves on tour. And since June is becoming more and more recognized as a time to celebrate every expression of gender and sexuality, we LGBTQIA+ staffers at Go Ahead have put together a list of our favorite LGBTQIA+ friendly places around the world. Plus, we’re sharing some recommendations of what to do in each destination based on our experiences there. After all, LGBTQIA+ travelers need welcoming travel destinations to visit all year round.

There are many incredible destinations full of fun and prideful experiences that welcome our LGBTQIA+ travelers with open arms. Whether you’re looking for a relaxing vacation spot or joyful Pride celebrations abroad, we hope this list of top travel destinations can help you plan your next journey. 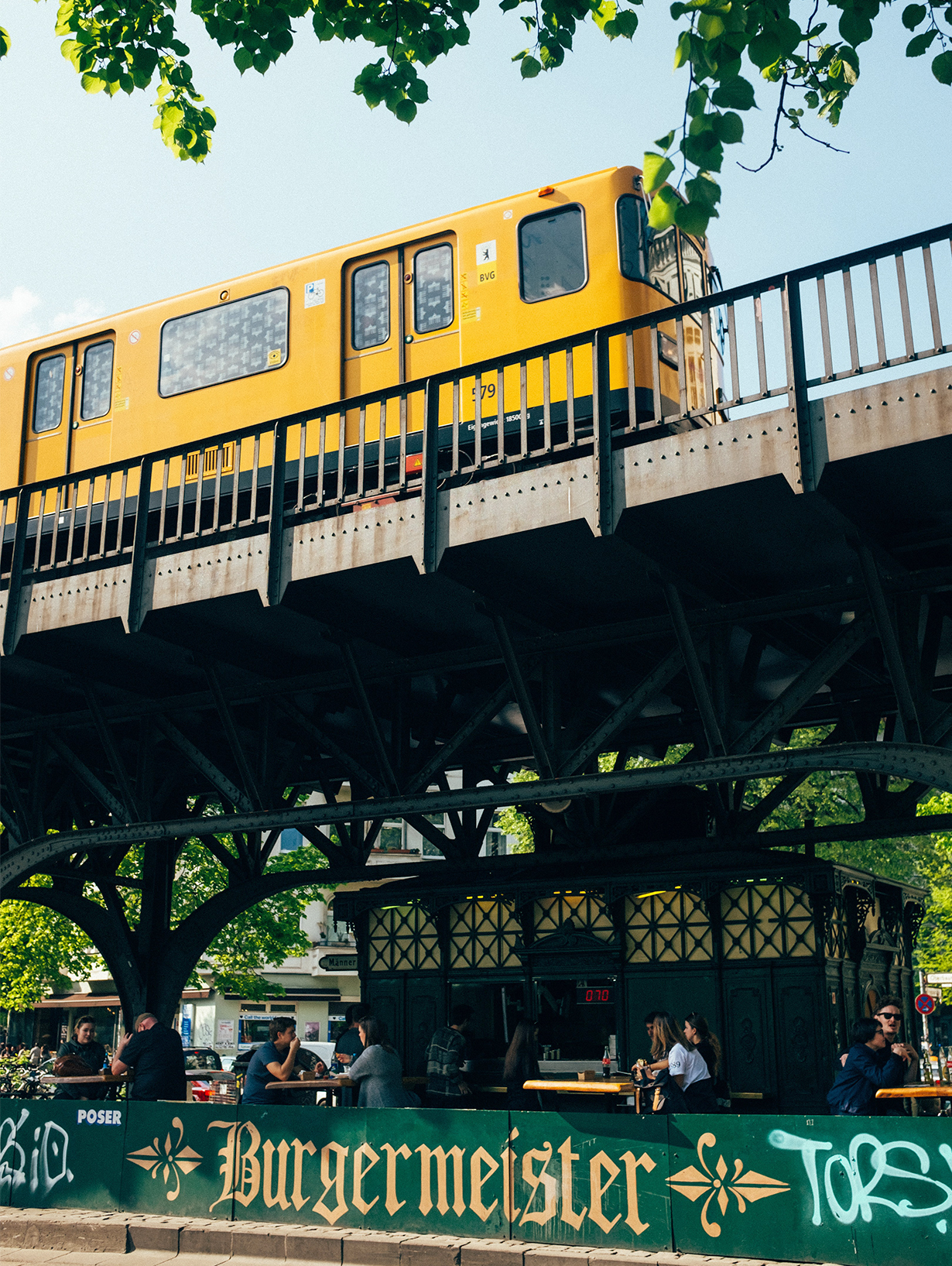 A good place for a good time, Berlin is the perfect spot to explore if you’re looking for an LGBTQIA+ friendly travel experience. The first gay neighborhood was established here in the 1920s and today, the city is considered the most LGBTQIA+ friendly city in Europe (and maybe the world).

“Berlin was an incredible place. It’s very open, and LGBTQIA+ people are abundant,” said staffer Brigid. “The city feels very welcoming and inclusive to all different types of people.”

In Nazi Germany, homosexuality was deemed a crime, and many people were persecuted because of their sexual orientation. The memorial, unveiled in 2008, honors the thousands often-forgotten homosexual victims who were tortured and murdered during the Holocaust.

“What I found particularly incredible about Berlin was that they didn’t shy away from or sugarcoat their past,” said staffer Brigid, who visited the memorial. “They have many monuments that show the full horror of it and have worked over the better part of a century to educate their citizens and cultivate a place where nothing like that will ever happen again.”

One of the biggest archives of LGBTQIA+ culture in the world, the Schwules Museum is a rotating exhibition of related events, history, art, and culture celebrating pride. It’s one of the few museums in the entire world dedicated to documenting our community’s history (with a main focus on Berlin). The museum is only a few blocks away from Nollendorfplatz, Berlin’s oldest “gay village” dating back to the early 20th century.

Settle in for Kaffee und Kuchen (traditional coffee and cake!) at this local favorite. When Neues Ufer opened in 1977, it made a splash with its sprawling windows—no other gay and lesbian cafe in Europe allowed pedestrians to see in. That confidence and openness radiates through the warm atmosphere and rotating art on display here. When you drop in, ask your server about David Bowie. (This was his local haunt when he lived in Berlin). 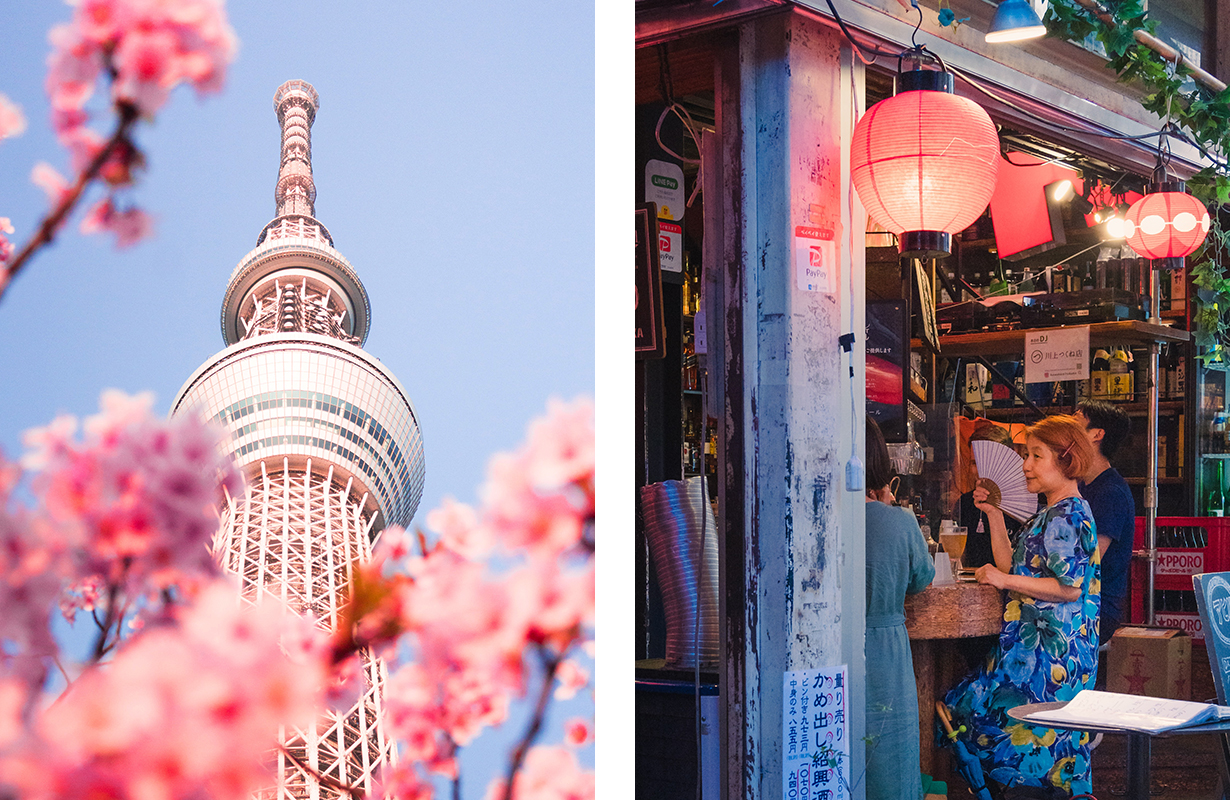 Japan’s capital is quickly rising in the ranks as a vibrant LGBTQIA+ destination. Tokyo’s Rainbow Pride festival is held during Golden Week (a week in late-April that’s filled with Japanese holidays), with local food and shopping vendors lining Yoyogi Park. Tokyo’s commitment to growing its LGBTQIA+ community is gathering steam every year.

“When I was there in 2019, multiple countries had embassy booths (at Rainbow Pride Festival),” said staffer Daniel. “They documented their LGBTQIA+ progress, as well as their commitment to helping Japan with LGBTQIA+ policy and acceptance,” he said.

Tokyo’s Pride month is in May, but you can show your pride any day of the year in Shinjuku Ni-Chome—Tokyo’s gay district. Turn any corner and you’ll find LGBTQIA+ friendly cafes, bookshops, nightclubs, and an electric atmosphere.

“While Shinjuku Ni-Chome is a collection of mostly bars and clubs, there are spaces within Ni-Chome built for community engagement such as AKTA, which is the community resource center of Ni-Chome,” said staffer Daniel.

This annual Japanese film festival exclusively shows LGBTQIA+ films. Organizers hope the event provides a space to create a more diverse and free society. So if you’re in the Aoyama neighborhood in July, Daniel also recommends dropping in for a screening. (Every film is shown in both English and Japanese!) 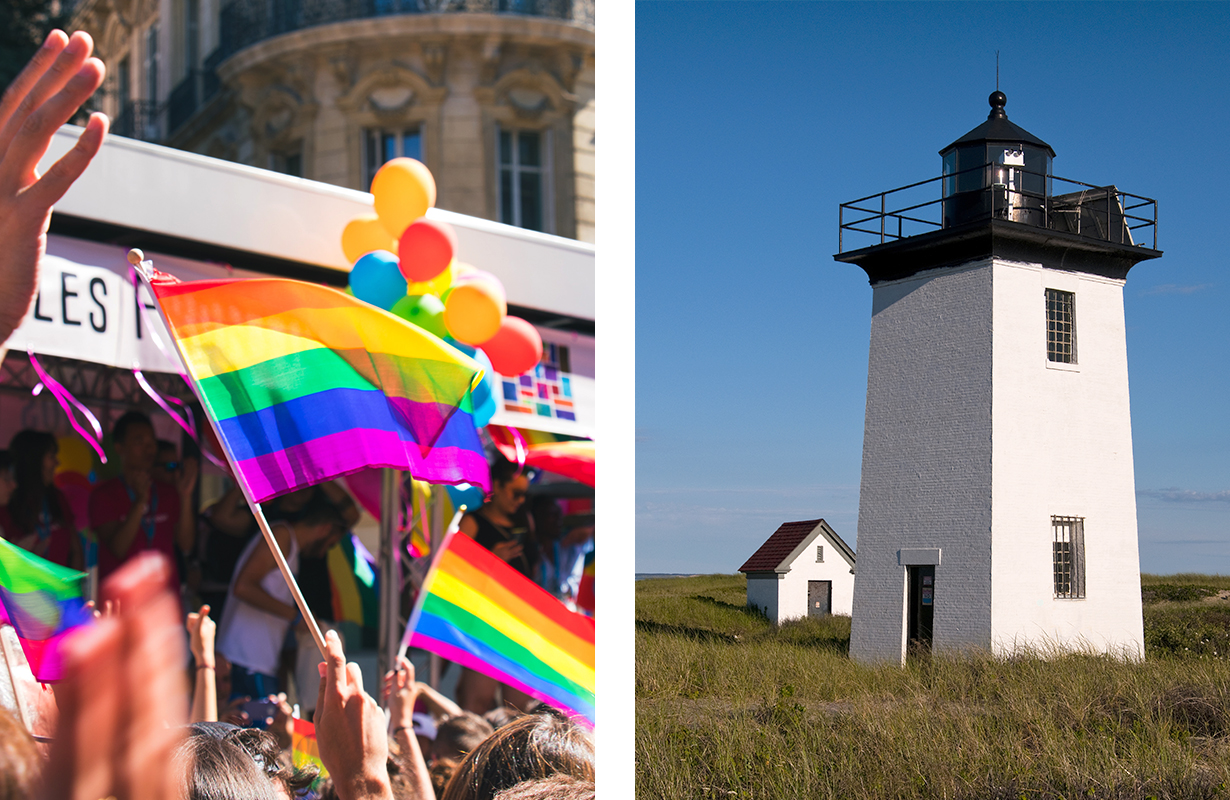 The Cradle of Liberty is also the capital of the first state to legalize gay marriage. So it’s no surprise that Boston embraces one of the largest LGBTQIA+ community on the East Coast. Walk these revolutionary streets and you’ll see rainbow flags proudly waving in corner shops, ivy-covered windows, and elementary schools. And with Provincetown (one of the most LGBTQIA+ friendly places on the planet) only a quick ferry ride away, it’s easy to see why Boston is one of the most welcoming cities for folks in our community to visit.

Swing by this concept shop in Union Square’s Bow Market to peruse stories by women, people of color, and the LGBTQIA+ community. You can also pick up natural wines made by non-dominant groups of people.

“My roommate used to work there and it’s amazing. They have queer events, too!” said staffer Karen.

Be sure to explore the rest of Bow Market while you’re there—it’s a hub for creative, open-minded folks and a must-stop for the best local entertainment, food, and artsy shops.

If you know art, you probably know that the Museum of Fine Arts in Boston has the leading collection of LGBTQIA+ themed Classical Greek and Roman art. What you may not know is that this stunning museum in the Fenway neighborhood also houses LGBTQIA+ art from other cultures, too. A Harvard art historian will be thrilled to tell you all about it on his “Gay Secrets of the Museum of Fine Arts” tour. The experience includes admission to the museum and breaks the straight-laced stereotypes about Boston.

Famously known for having one of the most vibrant LGBTQIA+ communities in the country, Provincetown is a must-visit if you have some free time during your trip to Boston. 90-minute ferry rides are available to Provincetown from 1 Long Wharf in Boston. P-town is a hub for creative culture and a diverse LGBTQIA+ scene. Want a quiet beach day? You got it. Looking for a lively night on Commercial Street? All yours. And it’s all canopied under a welcoming, laid-back feel. 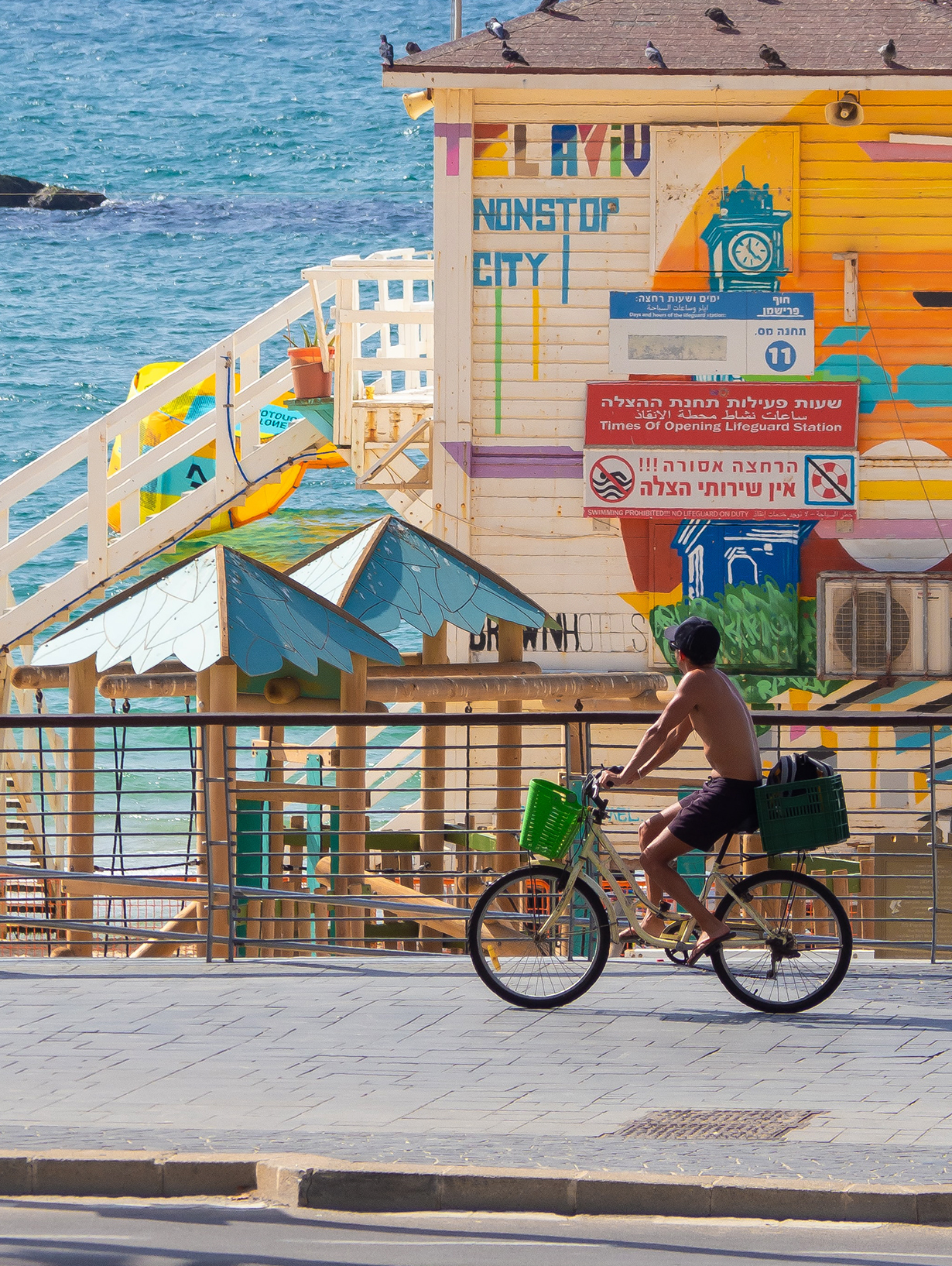 Tel Aviv boasts year-round sunshine, white-sand beaches, and one of the most liberal atmospheres in the world. It’s a refuge for LGBTQIA+ folks from less accepting, surrounding countries in the region. So if you’re looking for a place to celebrate pride year-round, look no further. Every year, the vibrant city hosts one of the globe’s largest Pride Month celebrations.

Hilton Beach is Tel Aviv’s unofficial LGBTQIA+ beach. Hit the surf and sand here for a daytime chill or a lively night out. It’s fully equipped with sun chairs, volleyball courts, surfers, and a host of restaurants.

Can’t make it over to Hilton Beach? No sweat. Tel Aviv is lined with some of the most beautiful beaches in the entire world—so you can’t go wrong with any.

“I would honestly just recommend going to the beach or any public space and striking up conversation,” said staffer Robert. “Everyone is so welcoming, and you never know where the day will take you!”

The LGBTQIA+ experience is a beautiful spectrum and deserves to be celebrated—in June and year-round. We hope these destinations and experiences can help our LGBTQIA+ travelers take part in meaningful travel that not only opens their world, but affirms and embraces them for who they are. From all of us at Go Ahead Tours, Happy Pride!