Guide to Las Fallas in Valencia

Spain is well-known for its vibrant culture and party-like atmosphere. The reputation holds true when it comes to the Las Fallas festival in Valencia. Meaning “the fires,” Las Fallas is a week-long fireworks display of epic proportions. Here’s what to know and how to enjoy it on your visit to Spain on tour. 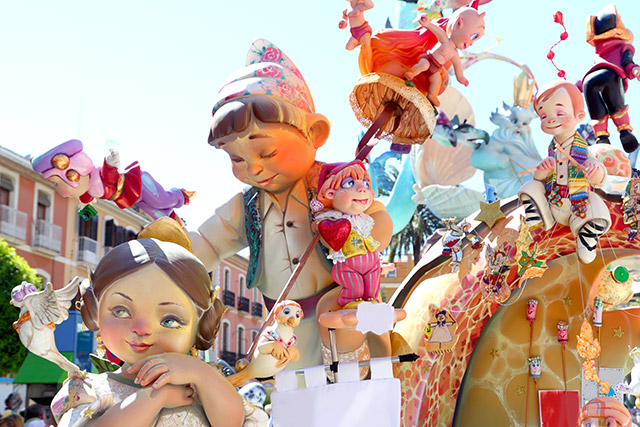 What it is Las Fallas festival

The massive festival is held every year in Valencia from March 15-19. Originally a feast dedicated to St. Joseph, the patron saint of carpenters, Las Fallas has evolved into a bold, wildly popular event that welcomes some three million travelers to Spain’s third-largest city.

Marked by explosive noise, colorful parades and musical performances, the party draws revelers into the streets from the early morning until late at night. The focus of Las Fallas is the display of ninots, _large papier-mâché dolls built out of cardboard, wood, Styrofoam and cork that depict satirical, often lewd, scenes. The ninots can cost up to $75,000 to create and they remain on display for the entirety of the festival, up until the very last day. On midnight after the final day, all of the ninots are set on fire in an event called La Crema, the culmination of the entire Las Fallas festival.

How to get there

If you plan to visit Valencia for Las Fallas, be prepared for long days with early mornings, which are unusual given Spain’s typically laid-back, late-rising lifestyle. Days of the festival start as early as 8am, where parades, bands and firecrackers take over the streets. Hotels in Valencia and the surrounding area book up months in advance, so it’s best to plan early if you hope to attend. Located on the southeast coast of Spain, the city is easily accessible by plane, train or bus. Once in Valencia, the public transportation system is easy to use—we recommend using the underground Metro rather than buses if you need to get around, due to the sheer amount of people navigating the streets. 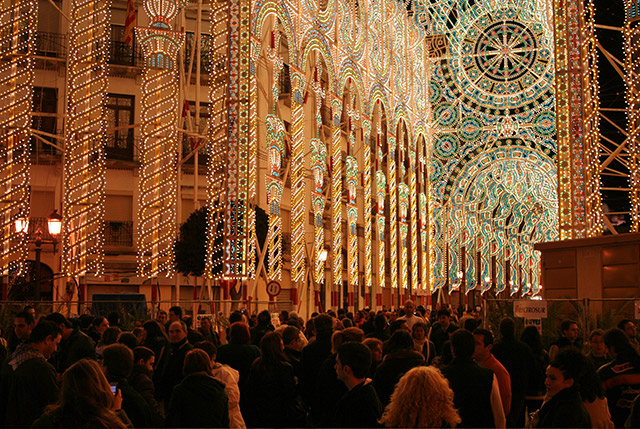 Each day at 2pm, firecrackers are set off in Valencia’s main square, the Plaza del Ayuntamiento, for what’s called the mascletà. It’s an extremely noisy event where different neighborhood groups compete for the loudest display and biggest volley—if you can handle the commotion right in the city center, it’s a sight you won’t want to miss.

Throughout the day, there are numerous parades and performances from local bands to enjoy. There is constant noise from the fireworks, and you’ll see many people (even children) lighting small firecrackers as they take part in the festivities. Local vendors sell plenty of street food throughout the day, and bars and restaurants are packed full of spectators all throughout the week.

Come nightfall, the parties continue. The final night of Las Fallas is perhaps the biggest performance of all, the moment where the ninots are burned in a huge, spectacular display. Throughout the week, visitors vote on the ninotthey would like to be spared this gruesome burning, so all but one of the ninots is fantastically burned from midnight on.

Paella is practically a staple in Valencia, and you can order this saffron-colored rice dish with meat, seafood or a mix of both. (Many restaurants will also offer a vegetarian version.) Aside from indulging in this popular Spanish dish, Las Fallas is a great time to try local street food, such as pumpkin buñuelos (donuts often served with thick, hot chocolate) or cream-filled churros. For a refreshing cocktail outside of the typical sangria, sip on an Agua de Valencia made with orange juice, gin, cava and vodka.

“Loud” doesn’t even begin to describe the noise level of Las Fallas, so a good pair of earplugs is a must. Pregnant women are not advised to attend due to the noise level and you’ll need to steel yourself for the ground shaking—it can be an experience! A scarf can be helpful to ward off the smell and smoke from the gunpowder, and keep some tissues on hand in case you need to use a porta-potty during a long day at the festival.

Have you ever been to Las Fallas in Valencia? Would you ever go? Tell us on Facebook!