Get to know Salamanca, Spain

You won’t find a city that’s more quintessentially Spanish than Salamanca. Located just a couple of hours northwest of Madrid by car, Salamanca offers a taste of the country’s true colors to everyone from locals and international students to travelers. Here, get to know a little more about this bustling, academic city worth visiting on your trip to Spain. 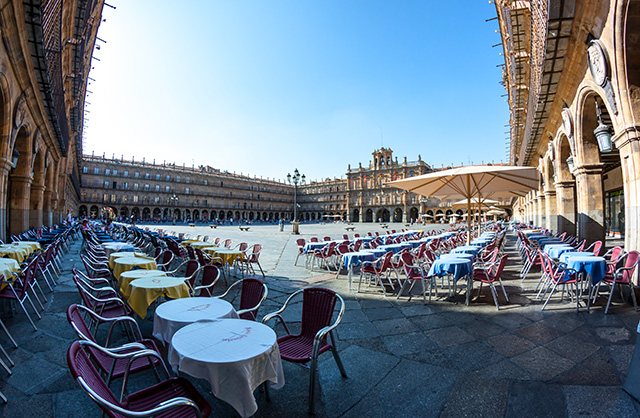 A two thousand-year-old Roman Bridge that spans the River Tormes is one of the many historic sites to be found in Salamanca. Throughout the city in the Castilla and León region of Spain, many monuments can be found that highlight styles from different periods of time. The University of Salamanca’s buildings showcase a blend of everything from Gothic to Renaissance to baroque styles. The neoclassical Anaya Palace and Casa de las Conchas, which has a unique facade covered in shells, are well worth a visit. Plus, you can’t miss the towering Old and New Cathedrals, built side-by-side from the 12th through the 18th centuries.

Salamanca earned its nickname, “The Golden City,” thanks to the glow of its many buildings constructed with sandstone. Recognized as a UNESCO World Heritage site, its Old City in particular is home to many of these brilliant sites. The baroque architecture is especially impressive in the Plaza Mayor, one of the most celebrated main squares in the country. Pay a visit to this square in the heart of the Old City to browse the shops and quaint cafes beneath its many arches.

With its many colleges, and one of the oldest universities in all of Europe among them, the city draws many students and intellectuals from all around the world. The lively population gives the city a distinctive youthful and inviting vibe. Best explored by foot due to its fairly small size, Salamanca is perfect for strolling around. In true Spanish style, try popping into several different bars and restaurants to sample a variety of tapas, or small plates.

What would you like to see in Salamanca on your tour of Spain?