How one Canadian couple makes local connections on tour

For Go Ahead travelers Dwight and Bonnie, Canadian flag pins serve as a meaningful symbol of home, and handing them out on tour is a small way to make impactful connections. Here, Dwight talks about what the gesture means to them and how it’s added to their travel experiences. 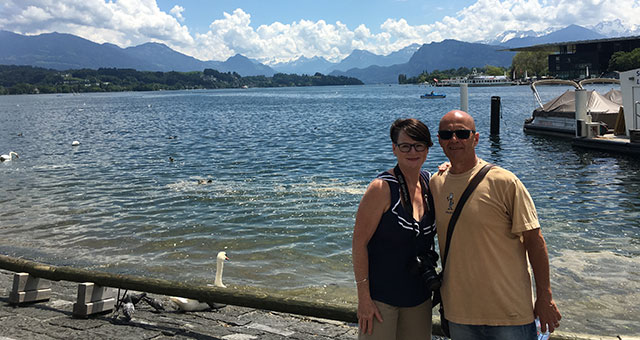 Bonnie and Dwight in front of Lake Lucerne in Switzerland

The idea struck about seven years ago, when Dwight and Bonnie brought some extra Canadian flag pins from their annual Canada Day celebration on tour. “Bonnie hosts a Canada Day celebration every year and we get flag pins to give away at the party,” Dwight explained. “That’s probably the way giving pins out on tour started. Now, I hand out about 100 to 200 pins during our travels, depending on how long our trip is. There’s a sense of giving and being proud.”

While handing out flag pins is a special way for Dwight and Bonnie to show their pride for their country, it’s also the perfect way for them to spread joy and learn more about the locals. “Bonnie and I are outgoing and we love to chat with people,” said Dwight. “So, I think giving pins out during our travels is an ice-breaker. As I started to travel more and more, I gave someone a pin whenever the opportunity presented itself. It breaks the language barrier down a little bit and opens people up. It makes them smile and it makes me smile!” 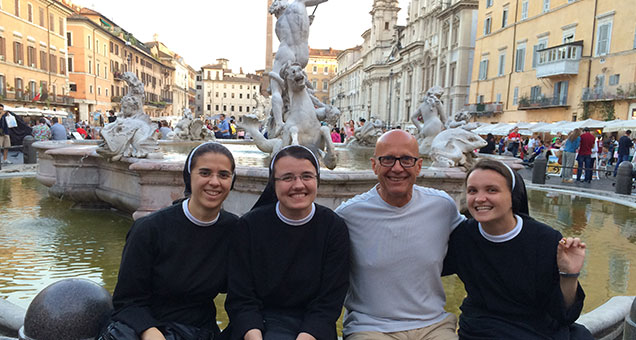 “I sat down with three nuns in Rome and gave them pins and had my picture taken with them,” Dwight said. “That was really a lot of fun!”

A smile and a small bit of friendly conversation are usually the hallmarks of gifting a pin. And, while each exchange is meaningful, there are some moments of connection that shine. “Bonnie and I were sitting in the old square of Málaga, Spain and we saw an elderly couple with their granddaughter,” said Dwight. “We sat down beside them and I gave them each a pin and tears came to the grandmother’s eyes. When I left, she stood up and gave me a kiss. I couldn’t believe it!”

The exchanges are sometimes moving, often funny, and always memorable, and the countless photos and stories Dwight and Bonnie have collected are wonderful reminders of all the connections they’ve made. “One time, I sat down with three nuns in Rome and gave them pins and had my picture taken with them,” Dwight said with a laugh. “That was really a lot of fun! On another tour extension in Salzburg, Austria, some of our group members were buying souvenirs. I happened to come by and when I gave the saleswoman a pin, she showed us her wedding pictures. She’d recently gotten married so that was a cool moment.” 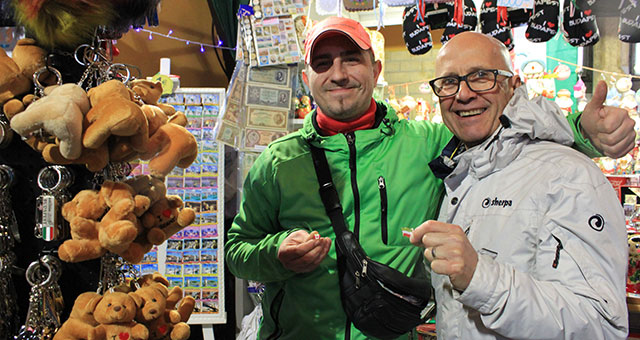 Dwight swapping pins with a local in Budapest, Hungary

While handing out pins is a great way to break the ice and connect with locals, it’s also the perfect way for Dwight and Bonnie to show their gratitude to the people who make their travel experience so special, including hotel staff. “In the morning at breakfast, the waiter or waitress will come along and they’re all so darn busy, so giving them a pin is just a small way of saying ‘thank you,'” said Dwight. “The next morning I’ll see them again and say ‘hello’ and it makes them smile. If we’re at a hotel for a couple of days, even the people at the reception will wear their pin and give me a thumbs up.”

Dwight and Bonnie’s gratitude doesn’t stop at hotel staff, and they’re sure to recognize some of the other people who make a Go Ahead tour so unforgettable: their Tour Director, local city guides, and bus drivers. “The local guides are so passionate about their city, and the Tour Directors are very wonderful people,” said Dwight. “The bus drivers also do so much for you every day, and I’ll give them a pin as well. They’ll wear it on their shirt or tie the whole time we’re traveling with them. On the last Convention Tour for Group Coordinators in Buenos Aires, our bus driver even gave me an Argentinian flag pin back! I don’t have a lot of pins from other countries, but that’s not what it's all about. I don’t expect anything from anybody in return; I just do it to make people happy.” 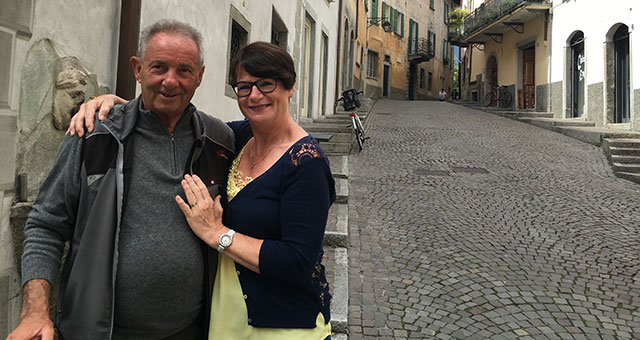 “Once in a while, I get in on pinning too,” said Bonnie. “This picture was taken in Chiavenna, Italy where I thrilled my shoemaker friend with a Canada pin.”

How do you make local connections on tour? Tell us on our Facebook page!