A look at the region where Switzerland, France & Germany meet

While Switzerland, France, and Germany share a border and boast incredible scenery, each has its own unique culture. The close proximity of these countries means travelers don’t have to venture far to get a taste of them all. On our Switzerland, Alsace & the Black Forest tour, you can wind your way through destinations rich in history, stunning landscapes, and delicious flavors. Here are eight of our favorite sites to visit—and things to taste—in this captivating region. 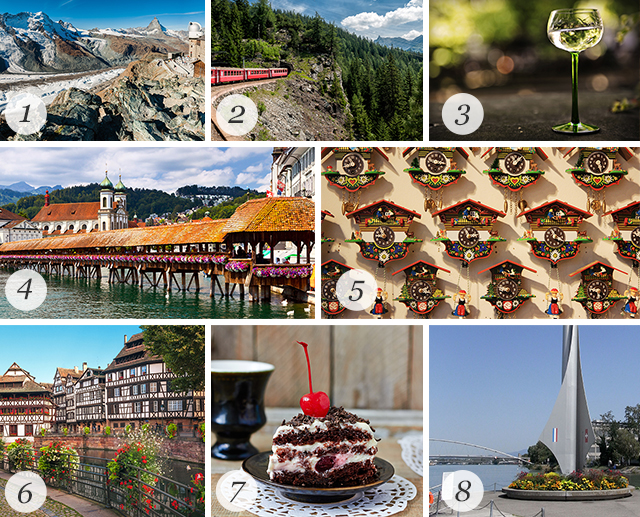 One of the best places to see the iconic Matterhorn is from the Gornergrat, which reaches an altitude of 10,135 feet. You can hop on Europe’s highest open-air cog railway to reach the top for incredible views of the Gorner Glacier and surrounding landscapes there. The continent’s highest-altitude hotel can also be found at the summit!

Connecting the resort towns of St. Moritz and Zermatt, the Glacier Express train is famous for offering riders panoramic views of the Swiss Alps. It winds through a stunning UNESCO World Heritage site, the Rhaetian Railway in the Albula/Bernina Landscapes, where two historic railway lines cross.

The Alsace region is well known for its cuisine and wine, which are influenced by German flavors, since the area was once part of Germany. One must-try dish? Tarte flambée, a flatbread-type of pizza made with crème fraîche, onions and thinly-sliced bacon. Pair it with a dry Riesling or Gewürztraminer, local specialties which are served in short glasses with green stems.

Stroll across the iconic Kapellbrücke, or Chapel Bridge, in Lucerne. This covered wooden footbridge, which spans the Reuss River in this Swiss city, dates back to the 14th century.

While it’s not clear who exactly created this iconic avian time teller in the 1700s, there’s no doubt it was made in the Black Forest region. The traditional clocks, which still contain hand-carved wood, can be found almost anywhere in the town of Triberg.

Step back in time as you meander through the charming Petite France neighborhood in Strasbourg, the capital of France’s Alsace region. Here, you’ll pass half-timbered houses, wind through cobblestone streets and cross canals above the Ill River, a tributary of the Rhine.

The welcoming university city of Freiburg is well-known as an entry point to the Black Forest. After passing the towering Gothic Münster, or Cathedral, and medieval city gates, sit back and try a local specialty: Black Forest Cake, made with decadent chocolate, cherries, and whipped cream.

The meeting point of Germany, France, and Switzerland is in the Rhine River, just next to the Swiss town of Basel. Look out for the monument, called the Dreiländereck, which marks one of the few tripoints near a major city.

Have you ever traveled to this part of Europe?