Beers of Germany: From Kölsch to Dunkel 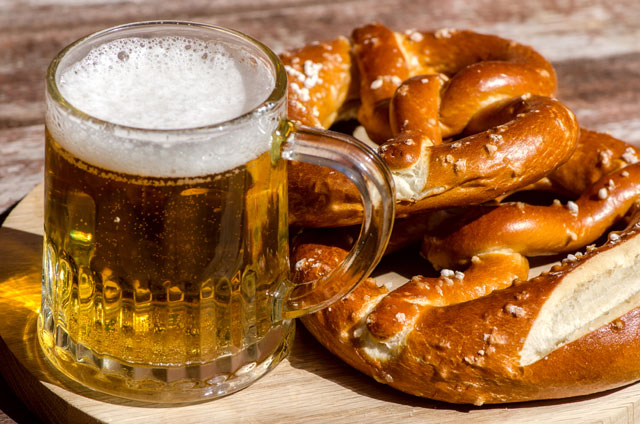 Various reports list Germany somewhere between second and fourth in the world when it comes to per capita beer consumption. And while the Czech Republic tends to come out on top in that race, Germany’s Oktoberfest celebration is the undisputed king of brew fests and has cemented the country as an authority on beer culture. Germany produces over 5,000 brands of beer out of 1,300 breweries, with the highest density of breweries in the world is reportedly found just outside Bamberg.

From the 16th century until 1987, beer production in Germany was strictly regulated by a purity law, the Reinheitsgebot, which stated that water, barley, hops, yeast and sugar were the only ingredients that could be used. Today regulations are a bit more lax—but that doesn’t mean that Germans are any less serious about their brewing.

Whether it’s a weizenbier, hefeweizen or a weissbier, this Bavarian-style beer is made with malted wheat in place of malted barely, giving it a lighter color. Unfiltered varieties (hefeweizen) appear cloudy, while filtered varieties (kristallweizen) are free of suspended yeast particles and have a much clearer appearance.

Only legally brewed in the Cologne region (Köln in German), Kölsch beers are bright yellow in color and have a slightly hoppy taste. In traditional pubs, the customs around imbibing Kölsch are strong—servers called Köbes carry full beers on a special circular tray, replacing empty glasses with full ones unprompted until a drinker signifies that they are finished by covering their glass.

Only a handful of beers are served in the Oktoberfest tents—dubbed “Märzen,” they’re traditionally brewed beginning in March. The category covers a wide range of styles, from pale to dark brown, but all varieties are marked by a full body and distinct maltiness.

Traditionally, bocks are sweet, strong and copper brown with an off-white head. It was originally brewed in the 14th century in the town of Einbeck. The style was later adopted by Bavarian brewers in Munich, whose accents shifted the pronunciation to “ein Bock,” which actually means “billy goat” in German. Generally associated with special occasions and holidays, the brew was also historically sipped by Bavarian monks during times of fasting.

Meaning “dark” in German, the dunkel category encompasses a variety of malty lagers that range from light amber to a dark reddish brown. The dunkel is the rustic beer of the Bavarian countryside and, as it was the most popular style at the time of the Reinheitsgebot, was the country’s first fully regulated beer.

Want to get your own taste? Find them on our tour, Food & Wine Tour: Beers of Belgium & Germany.