When traveling, sometimes the flavors we taste are as memorable as the sights we see. More than just satisfying a sweet-tooth, treats and desserts often shed light on cultural traditions, history and holidays. With this in mind, our team rounded up nine can’t-miss desserts for your European adventures. 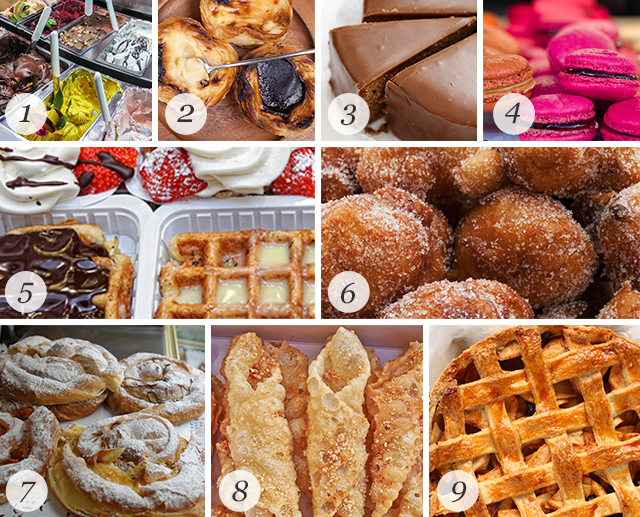 Gelato in Italy Like so many Italian masterpieces, gelato has ties back to Florence during the Renaissance. Legend has it that the frozen treat debuted at a feast hosted by the famed Medici family.

Pastel de nata in Portugal Centuries ago, monks used egg whites to starch clothes and produce wine. The leftover yolks made their way into baked goods, such as this custardy tart, which traces its roots back to the Jerónimos Monastery.

Sachertorte in Vienna This decadent chocolate cake has royal roots. In 1832, an Austrian Prince tasked his chef to create a special dessert for a state event. The chef fell sick and his 16-year-old apprentice, Franz Sacher, turned out this now-famous torte.

Macarons in France The quintessential French confection, the macaron is a double-decker meringue cookie filled with ganache, buttercream or jam. While its origins are widely disputed, Paris’s Ladurée is now considered the prime bakery to sample the cookies.

Waffles in Belgium The waffle is loosely tied to communion wafers from the time of the Crusades. Centuries later, the recipe has evolved into the fluffier, tastier modern-day treat.

Donuts in Croatia Croatia’s favorite desserts are very doughy, like sweet breads, pancakes and dumplings. One pastry that caught our eye? Donuts. Similar to what we might call donut holes, these sweets are particularly popular during Carnival and are usually filled with jam or cream.

Ensaïmades in Spain While it’s found in many Spanish-speaking countries, the most traditional version of this pastry is from Mallorca, thanks to the island’s unique ingredients.

Diples in Greece Often served at weddings, this crispy treat is made from a thin layer of dough that’s folded (diples gets its name for the Greek word for “fold”) and fried.

Apple pie in the Netherlands While it’s common for the Dutch to serve apple pie during celebrations, it’s also enjoyed with morning coffee as a casual (and tasty) morning treat.

What dessert are you dreaming of tasting? Tell us on Facebook!