Although smaller in scale than many of the world’s other well-known waterfalls, the ethereal cascades running for eight kilometers through Plitvice Lakes National Park have a magic all their own. The individual falls number in the hundreds, making this large, UNESCO-protected park one of the most intriguing places in Croatia. The delicate cataracts, which pour from lush greenery and tumble from terrace to terrace across the park’s 16 picturesque lakes, are truly striking. Here are four sights to revel in as you trace the falls’ journey through Plitvice—a place you really have to see to believe. 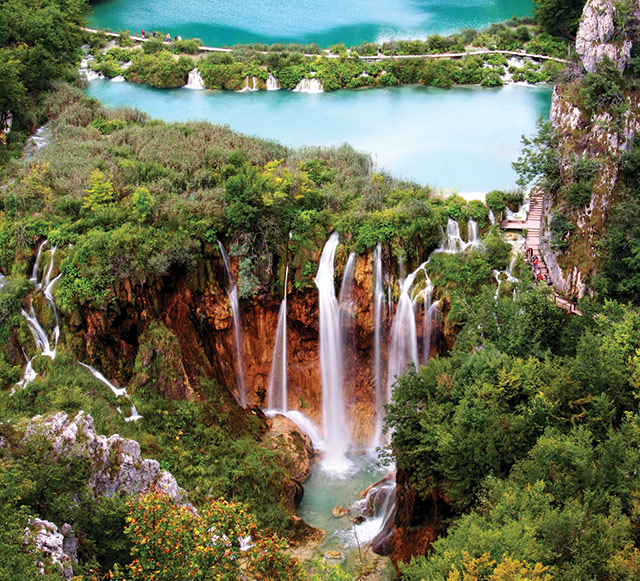 The park’s waterfalls are continuously eroding and depositing limestone from the surrounding mountains, and the limestone’s calcium carbonate subsequently reacts to moss, algae and bacteria. This geological process creates travertine—a type of porous stone—which has built up over thousands of years to form dams. These dams grow about one centimeter per year and they separate and shape the park’s lakes, caves and cascades, which in turn affects the trajectory of the falls.

The crystal-clear, jewel-colored water that feeds the falls shifts from shades of blue and green to grey and aquamarine due to the minerals present and the angle of the sun. The travertine that forms the park’s dams also coats the lakes’ floors in a white powder, making the water look bright and clear. Another reason the water remains so clean is the fact that it’s illegal to fish or swim in it; it’s also forbidden to walk on the travertine dams, so stay on the paths that run throughout the park.

The tallest fall in Croatia

Plitvice is home to Veliki Slap, which translates to “Big Slap,” and is distinguished as the tallest waterfall in Croatia. If you want to find yourself near the foot of this 250-foot cataract, make your way to the park’s Lower Lakes area where the fall streams into the Korana Gorge below.

The forest surrounding the park’s lakes and falls is home to diverse animal life, including over 120 different species of bird and four noteworthy carnivores: European brown bears, wolves, lynx, and wild cats. These animals thrive in the abundant natural environment, which covers more than 80% of Plitvice and helps prevent erosion.

Have you ever visited Plitvice’s falls on a trip to Croatia? Tell us about the experience on Facebook!