The city of San Sebastián is known for many things. It boasts stunning coastal views and is one of Spain‘s culinary capitals—making it the place to try some of the country’s best pintxos.

A form of tapas eaten in the Basque region of northern Spain, pintxos (pronounced peen-tcho) typically consist of a combination of fish, meats, cheeses or peppers secured with a toothpick to a small slice of bread. It’s the toothpick that sets them apart from traditional tapas, as they take their name from the Spanish word pincho, or “spike.”

These small bites serve as much (if not more) of a social purpose as they do a culinary one, and it’s not uncommon to find groups of friends “pintxo hopping” between pubs at the end of the workday. We wanted to know more about these traditional Basque treats—and about the city known to serve the best—so we reached out to a few of the experts on our team to get their take on trying them in San Sebastián. 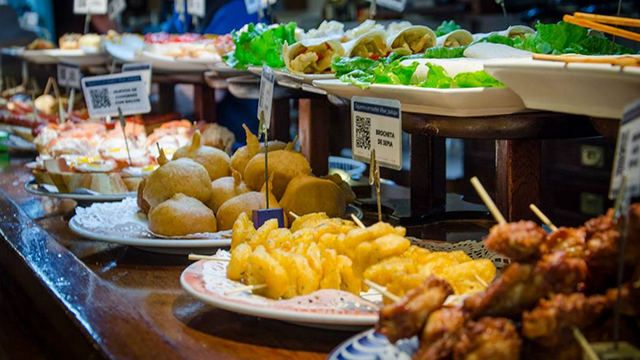 Grab a bite to meet the locals

“I loved San Sebastián! It’s a gorgeous, charming destination right on the water, and I found that the best way to meet locals was by going out to order pintxos. You really get to experience the local life by grabbing a drink and delicious seafood or even sandwiches. The city is also home to a cool underground market, similar to Quincy Market in Boston, which is known for fresh seafood, meats and vegetables and is a very popular spot for residents of the city.” –Amanda, Senior Program Coordinator

People-watch while you eat

“San Sebastián is a must-see spot while in northern Spain. It’s such an amazing beachside city. I loved people-watching in Plaza de la Constitución while enjoying delicious pintxos and sangria. I also loved the charming Old Town, and I think everybody should make it a point to see the stunning Playa de la Concha during their visit. San Sebastián is one of my favorite cities in Spain.”_ –Vivian, Customer Relations Representative_

“The craziest pintxo that I tried was “squid in its own ink,” otherwise known as txipirones en su tinta in the Basque language. It requires one of the most involved and intricate preparations of all the Basque pintxos. However, my favorite pintxos were croquettes, which can be made with many different fillings including fish, chicken and vegetables. I was personally a big fan of those filled with cheese and spinach. You can find croquettes in other areas of Spain, but they taste the best in Basque Country, where the cooks have a reputation for taking extra time to meticulously perfect the art of pintxos.” –Katie, Senior Customer Relations Representative 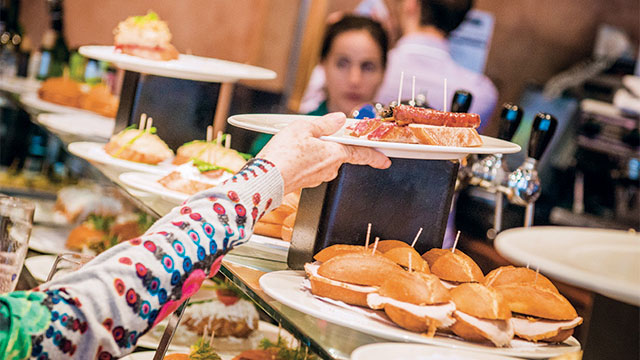 Want to make your own? Here are some easy recipes:

Steps: 1. Layer cheese and chorizo on top of sliced bread and skewer with toothpicks. (Recipe modified from npr.org)

Steps: 1. Before you begin, refrigerate all the ingredients and plates you’ll be using for about an hour. 2. Mix drained tuna, onion, mayonnaise, lemon juice and ground black pepper. 3. Stuff peppers with tuna mixture. 4. Place stuffed peppers on top of the sliced baguette pieces and skewer with toothpicks. (Recipe modified from tapasbonitas.com)

Have you ever tried pintxos in Spain? Which was your favorite? Let us know on Facebook!